What happened to the original cast of 'Meteor Garden'?

In 2001, four tall, dashing college students (and let's not forget their long, flyaway hairstyles) and a uniquely headstrong leading lady who wasn't afraid to stand up against her bullies took TV viewers across the Asian region by storm.

Taiwanese drama series Meteor Garden, based on the Japanese manga series Hana Yori Dango, revolved around four popular, rich friends, collectively named F4, and a new student at the university, Shan Cai, who comes from a family of little means.

Refusing to bow down to the group's domineering ways, Shan Cai stands up against its hotheaded leader Dao Ming Si, which unexpectedly causes him to fall for her.

The 27-episode series was so successful it even spawned a sequel, Meteor Garden II. (Although, personally, it wasn't as memorable as the first season.)

With a remake of the show, Meteor Garden 2018 (the first six episodes are on Netflix), we look back at the original cast who made us laugh and cry, and discover what they're up to now.

Who can forget the feisty, strong-willed Shan Cai who captured the heart of the rich, cocky Dao Ming Si? Its actress Barbie Hsu gave a stellar performance and it'll probably go down as one of her most iconic works.

The 41-year-old married Chinese entreprenuer Wang Xiaofei in 2010. They have two children together.

The spoilt, temperamental Dao Ming Si who had a lot of growing up to do was played by Jerry Yan.

After Meteor Garden, Yan went on to star in a number of well-received dramas such as The Hospital, Starlit and Down With Love. Yan also built a substantial music career, with three albums under his belt.

The 41-year-old actor dated Red Cliff actress Lin Chi Ling for six years before breaking up in 2006. Early this year, rumours swirled that the two are back together and a wedding was underway but both parties have since denied it.

Ken Chu may have played a Casanova during Meteor Garden but in real life, his heart is set on Chinese actress Han Wen Wen. The couple tied the knot in Bali - witnessed by Yan and Wu - in 2016.

Professionally, Chu went on to release two solo albums and acted in both TV and film projects.

In 2016, after being criticised for his weight gain, Chu opened up about his struggle with fibromyalgia (which results in pain all over the body). 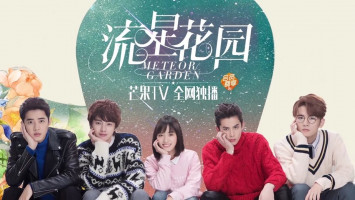 While the storyline for Mei Zuo wasn't as richly written compared to the rest of the F4 members, its actor Vanness Wu still managed to captivate viewers.

After Meteor Garden, Wu found his footing as an R&B, hip-hop artiste.

As a solo act, Wu has released six Mandarin and two Japanese albums. In 2015, the 39-year-old appeared on Asia's Got Talent as a judge.

Shan Cai was drawn to the sensitive, quiet Hua Ze Lei from the get-go. Interestingly, not only were Vic Zhou and Hsu playing lovers for a while on the show but in real-life too!

The two ended their relationship in 2008 after dating for three years. Zhou married his Black And White co-star Reen Yu in 2015.Career-wise, the 37-year-old is not afraid of taking on challenging roles. In 2013, he played a World War II prisoner of war in Home, which won him Taiwan's Golden Bell Award for Best Actor.

Did you know Rainie Yang was given a much smaller character to portray initially?

Yang got bumped up to a supporting character, Xiao You - Shan Chai's bestie - at the last minute. Lucky for her as the character helped open doors to an illustrious showbiz career.

Edward Ou - who played Shan Cai's lovable childhood friend that harboured feelings for her, Qing He - acted in a handful of dramas after Meteor Garden. Unfortunately, after he was found guilty of stealing a vehicle, his career has been going downhill ever since.

Blue Lan had a minor role on the show as Dao Ming Si's cousin Ya Men who tried to steal Shan Cai's heart at one point. However little screen time Lan got, it was enough to catapult the hunky actor to fame.

After the show, Lan received plenty of screen time, starring in a long list of dramas including Apple In Your Eye, where he led the cast.

Meteor Garden II wasn't as exciting as the first season (the storyline being a tad too slow and meandering) but it introduced us to Singaporean actress Michelle Saram, who played Dao Ming Si's new love interest Ye Sha.

Saram, who acted in TVB shows like At The Threshold Of An Era and A Step Into The Past prior to Meteor Garden, later decided to slow down her acting career considerably to put her family first.

She married Ajai Lauw-Zecha, the son of a luxury hotel chain founder, in 2010. The 43-year-old marked her return to acting last year with a cameo appearance in the Louis Koo starrer, Paradox.