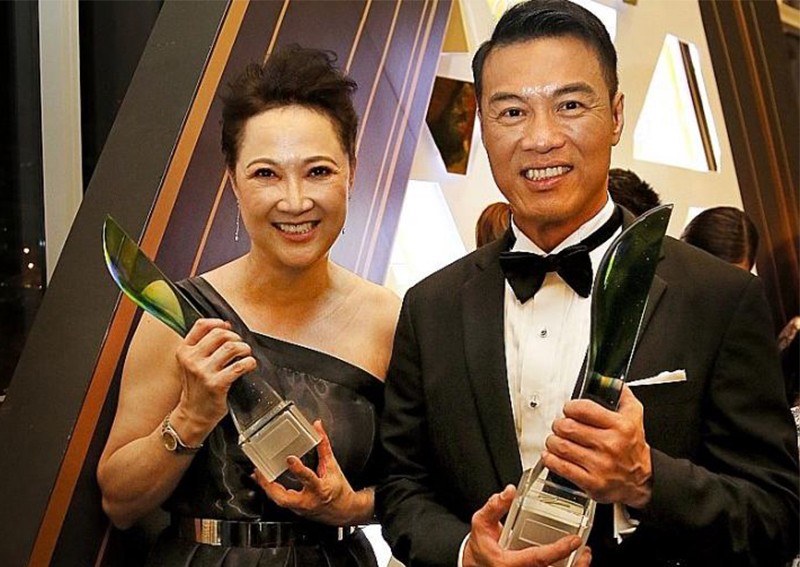 Actress Hong Huifang and her actor husband Zheng Geping at the Star Awards 2019 with their awards for Top 10 Most Popular Female and Male Artistes.
Lianhe Zaobao

Love is in the air, and in the spirit of celebrating love and romance, we turn to celebrity power couples to learn what it takes to keep a relationship going for decades.

For local actress Hong Huifang, what works best for her decades-long relationship with hubby actor Zheng Geping is to take time apart after an argument to let things cool down. The 60-year-old veteran actress told AsiaOne: "When you're arguing, nothing you say makes it through to the other party.“

And when it comes to apologising and extending the olive branch, Huifang confessed that it's usually Geping who'll make the first move and she'll forgive him readily. However, the longest time they've spent 'apart' was one week, during which the couple only made small talk but never acknowledged the argument they had.

It was only after Geping broke the ice that Huifang reciprocated.

In millennial speak, the couple would be defined as #couplegoals because they've been married for 27 years. They have two children, who are often the source of their arguments because they have different parenting styles.

"I'm the 'black face', while he's the 'white face'," she quipped, referring to a common Chinese expression to describe herself as the strict parent and Geping is the one who's lenient.

But no matter how angry she is with her husband, she strongly believes that one should not air their dirty laundry in public. Commenting on people's habit of taking to social media to vent their relationship troubles, she pointed out that it could be detrimental to your partner's reputation, especially if you get back together but people have already formed a certain impression of the other person.

Thankfully, it seems that nothing can really faze the loving couple, not even with the attention on Geping since he got ripped.

When asked how she deals with any unwanted attention, she laughed: "I've been asked this question since 2009. I feel like everything's still the same. Besides, it's even better for you guys! You have eye candy."

Besides Huifang and Geping, there are other celeb couples who are famous for their solid relationships. Here are their tips.

ALSO READ: Health junkie Zheng Geping admits to smoking up to 2 packets daily in the past

Despite reportedly having very different personalities, this power couple has also been together for three decades, including 11 years as a married couple.

In a 2018 Chinese TV programme, the 54-year-old actress shared four marriage tips: first, she believes a woman must have the means to support herself financially and keep up to pace with what's going on in the world. If she doesn't, she wouldn't be able to converse with her partner on the same frequency, and he would eventually do that with someone else.

To Carina, the most perfect type of control is no control. A couple would naturally be different in their personality, so don't think about changing the other person. "He overlooks my flaws because of my many strengths, and vice versa," she said.

Lastly, she cautioned against saying hurtful words during fights. She added: "Sometimes he would apologise first, and other times, I would. But after so many years of 'training' with him, I've learnt to calm myself down first during our quarrels. He wouldn't have any reaction if I continue to argue with him in anger. A lot of things will pass easier if only you calm down. The scariest thing would be if you cross the line in the heat of the moment and say something horrible."

Julian Cheung and Anita Yuen, both 48, have been married for almost 19 years, but they are still thick as thieves and as loving as teenagers in high school. The actors, who have been dubbed Hong Kong's model couple, met and fell in love in 1992 before marrying in a secret ceremony in San Francisco nine years later. Their son Morton was born in 2006.

One secret to the longevity of their relationship could be their simple yet important daily rituals.

Anita also confessed that they say "I love you" to each other every night, and whenever they leave for work, they kiss each other. She teased: "I force him to kiss me by puckering up my lips."

Knowing the top priority in a marriage matters, too. She said: "Though he isn't romantic, doesn't dress nicely, and doesn't have 'taste', he has a very simple heart and does things because of the family and people. I think that's enough."