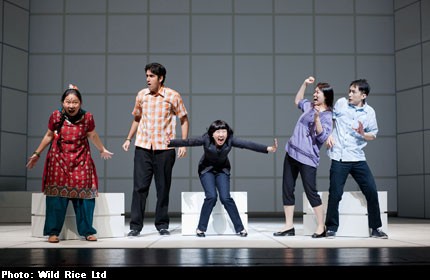 The provocative ending of the recently staged play Cook A Pot Of Curry caught many people by surprise - and none more so than the authorities.

When asked, the Media Development Authority (MDA) replied that the final scene - where a huge Singapore national flag is raised and then dropped to the ground - had not been included in the materials submitted to it for the play's classification.

The agency added that it has sent a note to local theatre group Wild Rice, which staged the play, to remind it of its obligations.

"To help audiences make more informed media choices, the MDA provides advisories and age ratings for arts performances. As the classification of any performance is based on our assessment of the materials submitted, arts entertainment organisers should keep us informed about any changes.

"As the last scene in the play was not part of the final script submitted, we wrote to Wild Rice to remind them to do so in the future and to also consult the National Heritage Board on the use of the state flag in their performance," said a spokesman.

It tackled the hot-button issue of immigration in Singapore. The title was based on a real incident where a couple from China complained about the smell of curry being cooked by their Singaporean Indian neighbours. The incident was reported in 2011.

Wild Rice founding artistic director Ivan Heng said in an e-mail message: "We would like to state for the record that we meant no disrespect to the national flag. We fully note the concerns of the MDA, and will take them into account in future productions of the play."

According to the National Heritage Board's website, the flag cannot be used for any commercial purpose. "A primary concern underpinning all the guidelines is that the national flag must be treated with dignity and respect at all times," it said.