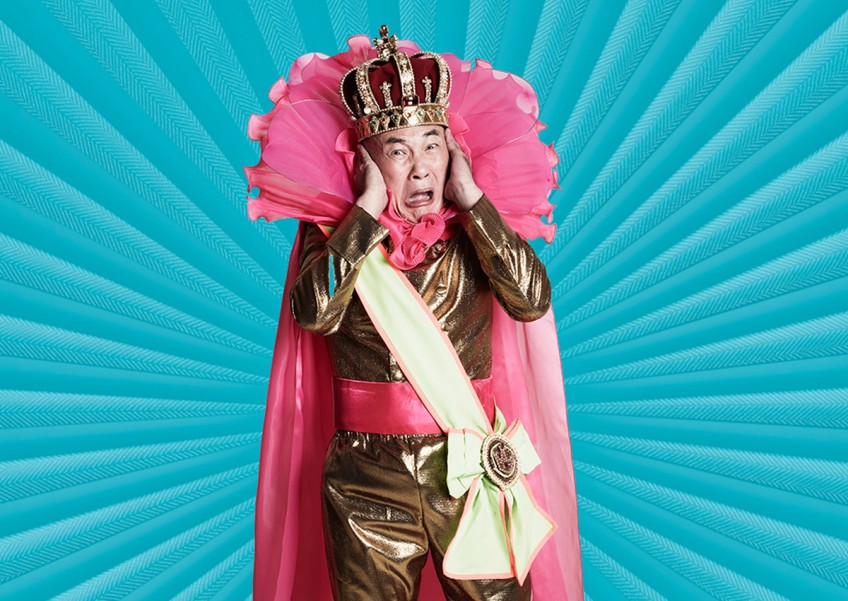 Despite starring alongside young, strapping actors half his age in Wild Rice's year-end pantomime The Emperor's New Clothes, theatre veteran Lim Kay Siu is not at all worried about having to show some skin on stage.

"I've shown my butt before in Magic Fundoshi (1996) when I came back from London. This one is just showing the front. My challenge is to make the emperor selfish, but charming, such that people love him even though he has turned cruel," says Lim, 59, speaking to Life over the strains of a flute and violin playing merrily in the background between rehearsals at the Drama Centre.

But he waves off questions by this reporter on exactly how much skin he is showing, as does the show's director, actress Pam Oei of Dim Sum Dollies fame, who is sitting nearby.

"You've to watch the show, it's part of the surprise," she says.

Lim's co-stars do not have it easy either. They have to sing, dance, act and play musical instruments in the show, an ambitious feat for any actor, says the show's music composer, Julian Wong.

"In a typical musical, there's already so much to think about when you work on vocals. That is more than doubled when you ask each actor to play an instrument," he says.

Auditions for the annual affair, which rounds off Wild Rice's line-up for the year, began as early as last December.

The show is a local take on Danish author Hans Christian Andersen's popular fairy tale about a pair of charlatan weavers who promise a proud emperor a set of clothes so fine that the foolish and unworthy cannot see it.

Wild Rice founder Ivan Heng says he was drawn to the story as it embodied the idea of "equalising" a leader by putting him in a state of nakedness.

The play also pokes fun at "the way we treat our leadership, how we worship the ground they walk on. We dare not criticise and we just naturally accept things".

He adds: "It's about herd mentality. So it's not a commentary about the emperor, as it is about the subjects. You saw it in Public Enemy."

He is referring to the company's adaptation of Henrik Ibsen's An Enemy Of The People, staged earlier this year at the Victoria Theatre.

The 30-strong cast of The Emperor's New Clothes comprise 11 children and 19 adults, including actors such as Audrey Luo, Siti Khalijah Zainal, Benjamin Kheng from local pop quartet The Sam Willows and singer Sezairi, who is making his theatre debut.

Sezairi, 28, and Kheng, 25, star as Khairul and Nathan No-surname, the orphaned sibling tailors who take on Lim's capricious villain of an emperor.

The pair have struck up a breezy camaraderie, declaring themselves "brothers from another mother" - borrowing lyrics of a song in the show - and finishing each other's sentences.

Kheng says: "Between the brothers, Khai is the scheming one and Nat is the doubter, the straight guy, so it's fun to play up that dynamic. "

"We keep each other in check," says Sezairi.

"It's sort of being in your own schizophrenic brain. You want to do something, you're split between your heart and brain. It's like Inside Out," adds Kheng, referring to the recent Pixar animated film.

Playwright Joel Tan says that the show was always going to be "a send-up of the jubilee year".

"I've asked myself questions like 'Was it worth it?', 'Is that all to it?' when some piece of SG50 storytelling gets shoved in my face. There's always something dark lurking underneath the pomp," he adds.

Heng says: "It's fun and light, it's satire. The beautiful thing about panto is that the world turns topsy turvy, and we imagine another possibility. In the end, peace and love are restored and we can go back and enjoy the new year."

WHEN: Friday to Dec 12, 2.30pm on Thursday and weekend, 7.30pm from Tuesday to Saturday. No shows on Monday