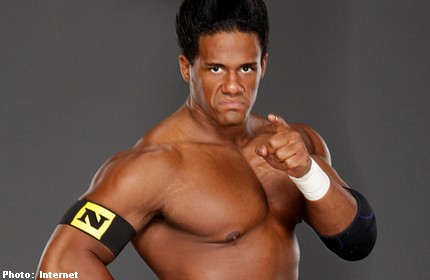 The World Wrestling Entertainment (WWE) wrestler made the announcement to the TMZ.com entertainment website after being asked if he believed a gay athlete could be successful.

"Absolutely. Look at me. I'm a WWE superstar and to be honest with you, I'll tell you right now, I'm gay. And I'm happy," Young said in Los Angeles.

Young said he believed his fellow wrestlers would have no problems with his decision to be open about his sexual orientation.

"I'm happy with who I am. I'm comfortable with myself. I'm hoping to be able to make a difference. It's very important to me that people understand that someone's sexual preference doesn't really matter."

The WWE later welcomed Young's comments in a statement on the organisation's website.

"WWE is proud of Darren Young for being open about his sexuality, and we will continue to support him as a WWE Superstar," the governing body said.

Some of Young's fellow wrestlers also praised his comments.

"That's a very bold move for him. And congratulations for him for actually finally doing it," WWE world champion John Cena said.

WWE, formerly known as WWF, has seen its profile diminish since its glory years in the 1980s but continues to attract an estimated weekly audience of 14 million in the United States.