In the teaser video for the upcoming episode, which was to be officially aired Monday night on the MBC programme "Straight," the show's team argued that it had obtained detailed testimony indicating that Yang had solicited prostitutes for two Southeast Asian investors in July 2014.

According to the allegations, Yang and a singer affiliated with the label bought dinner at an upscale Korean restaurant in a posh district of southern Seoul. Accompanying them were 25 women and eight men. Of the women, more than 10 were prostitutes from a well-known adult entertainment establishment that has close ties with YG.

After dinner, they moved to a club called NB, where Yang is a de facto owner, and sexual services were provided there, the video suggested.

Seungri, a former member of the K-pop band Big Bang, which is affiliated with YG, is also under suspicion of having arranged prostitution services for potential investors and of having paid related hotel fees with a YG company card. 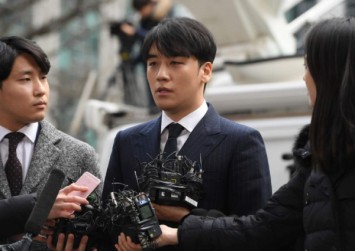 Despite evidence that YG and Seungri were involved in this type of misconduct, the police have not properly looked into the matter, the "Straight" team claimed in the preview footage.

YG Entertainment dismissed the claims as "not true."

"Although Yang Hyun-suk was there at the invitation of his acquaintance, there were no solicitations of any form," it said in a statement.

The police said Monday that nothing had been confirmed regarding the allegations. If necessary, however, they will investigate the case and work to determine the facts, they added.

The police are continuing their investigation into Seungri and his business partner Yoo In-suk, who co-founded Yuri Holdings with the former Big Bang star, over allegations that they procured prostitutes for investors and embezzled company funds.

The police earlier sought warrants to arrest both, but a local court refused to issue them on the grounds that the charges were still disputable.