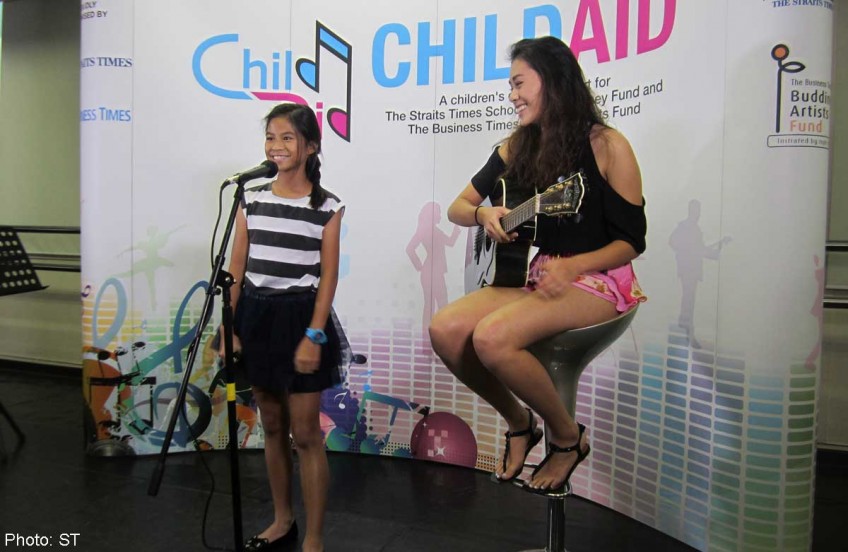 About 40 children and teenagers turned up last Sunday to audition for the year-end ChildAid charity concert, co-organised by The Straits Times and The Business Times.

In groups or as individual performers, they sang and played musical instruments in front of a panel of eight judges, including 52-year-old show director Jeremiah Choy.

But those auditioning had to prove more than their talent - they had to show they could take the pressure too.

Said a wide-eyed Micaela Rose Lai, 11, a Primary 6 pupil at Methodist Girls' School, after auditioning: "I didn't know there was going to be a lot of people - and cameras and lights!"

She sang the song Hey Ho, accompanied by her elder sister Erica Jane, 17, on the guitar as the Child- Aid crew photographed and filmed the performance.

Still, she and many of the others did not let their nerves get to them. Asked by the panel if she could dance, Micaela replied immediately: "I can learn."

The youngest to audition, seven-year-old Renee Yadav, calmly plucked the strings of her harp in her performance of The Nightingale by Deborah Henson-Conant. She told the judges that it was the same piece of music that sparked her interest in learning to play the harp 1½years ago.

The Primary 2 pupil of River Valley Primary School told Life! afterwards: "I like the melody."

Not all who turned up for the auditions were new to performing in front of a large audience.

One of them, Faith Ng, 18, was a top 10 finalist in last year's The Final 1, a reality TV singing competition on Channel 5.

Having heard of ChildAid through contestants who performed in the concert previously, the third-year Republic Polytechnic student was inspired to audition. She said: "I feel that being able to sing, being able to do something you love for somebody else, is very impactful."

Proceeds from ChildAid go to The Straits Times School Pocket Money Fund, which helps students from low-income families pay for transport to school and meals at recess, and The Business Times Budding Artists Fund, a programme which provides lessons in music or the arts for underprivileged children and teens.

Also at the auditions was Joshua Goh, 11, who is now performing in the musical The Sound of Music. He plays the role of Kurt, the youngest boy of the Von Trapp family.

Asked why he wanted to be part of ChildAid, the Singapore American School pupil, who will be entering sixth grade, said: "It's to help children."

Show director Choy said of those auditioning: "They're coming to perform. They have heard of ChildAid as a platform to share their talent, their love of music, rather than coming here to be a star." ChildAid marks its 10th anniversary this year. Choy added: "It's come of age. For the first time, we have an alumni sitting on the panel."

For example, this year's music director for the concert, Julian Wong, 26, performed in ChildAid in 2006, playing the piano and singing Dick Lee's Life Story. He was a vocal coach for ChildAid in 2010 and also helped with vocal arrangements in 2012.

Of the current auditions, Wong said: "I'm a bit overwhelmed. The ones who came and sang because they enjoy it - that's most beautiful."

ChildAid will be held on Dec 5 and 6 at Marina Bay Sands, the official venue partner.

Go to www.straitstimes.com/childaid for more information.