EPL: Bring on the mad managers 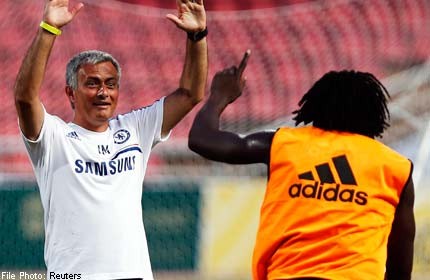 SINGAPORE - The world needs accountants just as much as rock stars. The rock stars seduce while the accountants file their tax returns.

It's a symbiotic relationship, the circle of life and all that. Behind every Rolling Stone is a number cruncher settling his expense account.

But with the new English Premier League season hurtling towards us, there is a concern that postmatch interviews might be dominated by bureaucrats rather than bohemian anarchists.

Arsene Wenger, for instance, grants his Arsenal artists a blank canvas to flourish, but he can be as entertaining as watching the paint dry.

That's not his job of course. He's a manager, not a circus juggler, and the greatest shows on earth always require a straight man. But 20 straight men are less a performance and more of a civil servants' annual luncheon.

Sanct imonious commentators will argue otherwise, but the Premier League is always at its finest when pantomime bogeymen stalk its biggest stages, laughing manically from the wings like the Count from Sesame Street.

Sir Alex Ferguson was the greatest villain of them all.

He was Darth Vader meets Hannibal Lecter at a Halloween party on Friday the 13th. He was way beyond pantomime villain. He was a ghastly caricature of the proverbial bad guy, someone the kids booed whenever he appeared on stage.

He made Heath Ledger's Joker look like Willy Wonka.

And now, he's gone. He's sitting upstairs like the Emperor in Return of the Jedi. He's still around, sort of, but robbed of his power, he's an elderly, wrinkled man in a hooded overcoat.

It's a bit like Darth Vader being followed by a regular imperial stormtrooper. No one disputes their badness, but with a nondescript stormtrooper, you're just waiting for him to get shot by Chewbacca.

While Wenger and Moyes veer towards the accountants' camp, Manuel Pellegrini is going so far out of his way not to antagonise anyone that he might as well wear a T-Shirt saying "I am the anti- Roberto Mancini".

The former Manchester City manager had his faults but he always held our attention.

Every inch the showman, Mancini played to the cameras like Marilyn Monroe in a white dress standing on an air vent. He was much maligned in the City dressing room, but he embodied Dr Evil effortlessly. It was just unfortunate that David Platt was no Mini-Me.

Elsewhere, Alan Pardew and Sam Allardyce may blow the odd gasket, Mark Hughes has an inflated ego and Steve Bruce appears to have an inflated head, but they remain suckers for safe sound bites.

Chris Hughton and Michael Laudrup are likely to battle for the world's nicest manager award and Brendan Rodgers shall continue to speak in cheesy man-management jargon just in case Ricky Gervais ever decides to remake The Office and cast someone else.

Ian Holloway can be relied upon for a laugh, but the rest of the coaching gang will plod to and from work with all the stature of the seven dwarves minus the cheery singing. Thankfully, there will be two exceptions.

Paolo di Canio and Jose Mourinho are cackling in the shadows. Their violent outbursts belong on an Elizabethan stage; their poisonous dialogue could have come from Shakespeare's quill.

When they talk, the world listens. In the case of di Canio, it's usually to laugh.

The Sunderland manager shuns subtlety in favour of uncensored shouting. If he doesn't kill off his players before the season starts by training them to death, he will have them sharpening knives and waiting for his back to turn.

He's already packed off popular recruit Alfred N'Diaye to Turkey on a season-long loan and stripped captain Lee Catermole of his squad number.

He might not make Christmas, but he won't leave quietly. He's Bon Jovi in a designer suit. He goes out in a blaze of glory (or infamy). Like a fireworks display exploding across the night sky - or a horrific car crash - you won't be able to take your eyes off di Canio.

The same is usually said of Mourinho.

But since his return to Chelsea, he's been involved in a disconcerting charm offensive. At times during the Blues' Asian tour, he sounded more like an accountant eyeing an office promotion than the petulant Portuguese prodigy who pandered to no one.

In the last couple of weeks, however, he's been praising erstwhile adversary Wenger, even empathising with his lack of silverware. Older and wiser, Mourinho insists he is burying hatchets.

A leopard doesn't change its spots and a manager doesn't change his temperament. If Arsenal smash and grab a late winner at Stamford Bridge, watch the devilish one in the dugout re-emerge; the definitive celluloid bad guy chewing up the scenery and eye-gouging passers-by.

That's what we really want. Well, maybe not the eye-gouging bit, but certainly the melodrama. Sport thrives on its operatic qualities and football remains the most addictive theatre of them all.

Whether it's a tragedy or a comedy - and Upton Park often gets treated to both - glorious heroes cannot thrive without inglorious villains.

Audiences love a bogeyman to boo.

So here's hoping that di Canio and Mourinho bring some mad management to proceedings. If they're bad, the Premier League will be oh-sogood.