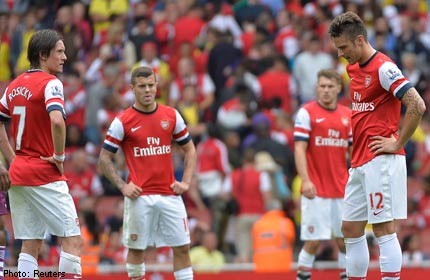 The Moyes era at Manchester United didn't get off to the greatest of starts in preseason, but the new boss passed his first test with a win over Swansea at the Liberty Stadium last Saturday. The real tests will come against Chelsea, Liverpool and Manchester City in the next four weeks, but at least Moyes can savour the feeling of topping the league table after the first weekend.

MINUS the sulk, Wayne Rooney produced an encouraging cameo against Swansea. The travelling United faithful might have given him a warm reception after two fine assists for Robin van Persie and Danny Welbeck, but it remains to be seen if Rooney will stay at Old Trafford.

It's business as usual for Chelsea with Jose Mourinho back in the dugout and a Bridge favourite on the score sheet. Never mind the penalty miss, that was one special free-kick from Fantastic Frank.

Will this be Liverpool's season?

Near-misses and Simon Mignolet's penalty save aside, watching the trio of Daniel Sturridge, Philippe Coutinho and Iago Aspas toy with the Stoke defence must be a huge encouragement for the long-suffering Anfield faithful. And that was without the attacking bite from Luis Suarez.

From England matchwinner on his debut in midweek to scoring a late penalty to win it for Southampton in a tough tie away to West Brom on Saturday. It has been a good week for Lambert.

In a word - dreadful.

Six penalties were awarded over the weekend, yet only three were converted.

Crystal Palace might have kept their scoreline against Spurs to a respectable 1-0 defeat, but will respectable performances be enough to guarantee Ian Holloway's boys safety? As Cardiff and Hull both learnt on the opening weekend, it's going to be a long season for the new boys.

UH OH. It's just the first match of the season and already the boo boys can be heard at the Emirates Stadium.

The Gunners might have felt hard done by by Villa's second penalty, but in reality, their defence sold them horribly short.

Injuries to Kieran Gibbs and Alex Oxlade- Chamberlain as well as Laurent Koscielny's suspension will only compound the situation.

Arsene Wenger has done well to free Arsenal of some of their deadwood, but he will have to act fast to inject some much-needed new blood.

Granted, the Frenchman's first yellow card was massively undeserved along with the added insult of a penalty.

However, no excuses can be made for his sending-off if he insists on flying into challenges when he's already in the referee's book.

The Dane has goalkeeper Simon Mignolet to thank for sparing his blushes after his brainless Superman impression led to a penalty for Stoke that nearly cost Liverpool three points.