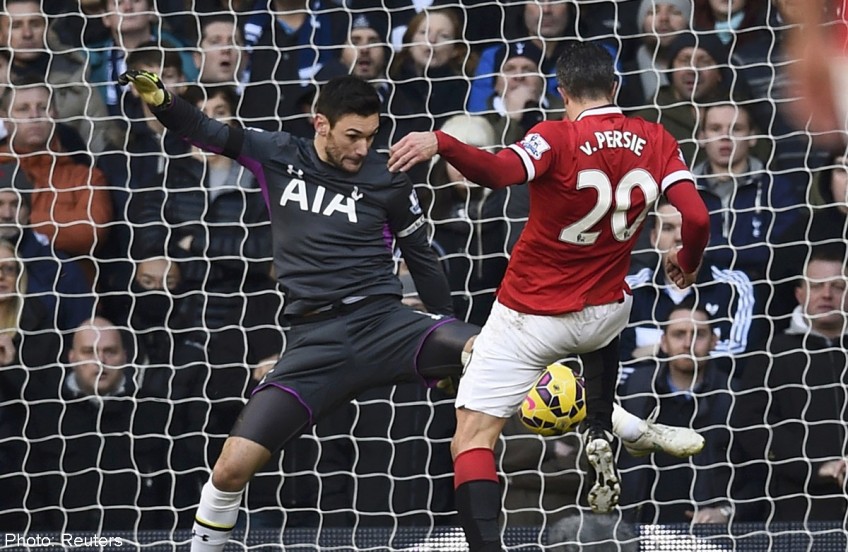 Against some of the finest attackers the English Premier League has to offer, Hugo Lloris stood firm between the posts last night.

Standing right across the field from David de Gea, widely regarded as the Premiership's best goalkeeper this season, Lloris stole the show from the Spaniard.

There was to be no denying the Frenchman his day in the sun.

Putting up an inspired performance at White Hart Lane yesterday, he helped Tottenham Hotspur to an exciting 0-0 draw with Manchester United.

As the in-form Red Devils kicked themselves for not making the most of their numerous goal-scoring chances, especially in the first half, it was the Spurs goalkeeper who hogged the limelight as he single-handedly extended the London side's unbeaten league run to five matches.

There were fears initially that he could miss this outing.

Against Leicester City on Boxing Day, the 28-year-old pulled off a couple of vital stops to guide Spurs to a 2-1 away win.

But, in the process, he ended the game with a bloodied mouth, after Leicester's James Vardy ran into him in an attempt to win the ball late in the match.

United must be cursing at his speed of recovery.

A draw result for Spurs certainly didn't look possible in the first half yesterday, when United exerted their authority.

As Louis van Gaal's men launched wave after wave of attacks, it seemed only a matter of time before they would break the deadlock.

After all, the visitors entered this fixture on the back of an excellent spell, having collected 22 points out of a maximum 24.

Twice, he thwarted Radamel Falcao in the first period.

Then he displayed excellent decision-making to stop Robin van Persie in the 39th minute.

The Dutchman's superb take-down in the penalty box saw him unmarked and staring Lloris straight in the face.

Yet, a poor second touch was all Lloris needed to spring into action, getting his foot to the ball before van Persie could pull the trigger.

Wayne Rooney's downward header moments later couldn't get past him either.

On the stroke of half-time, Lloris pulled off the most spectacular save of the day.

Ashley Young's long-range curling shot appeared headed for the top-right corner, until Lloris leapt at full stretch to tip Young's shot out for a corner.

The Red Devils emerged from the break a broken side.

They never regained the confidence in the second half as the dominance subsided and the shooting went awry.

Perhaps Lloris had already played his part, when he repelled everything the visitors could throw at him in the first period.

De Gea may be the popular choice as this season's best goalkeeper.

But Lloris is proving that on his day, he can give the Spaniard a run for his money.

He certainly did last night.

This article was first published on Dec 29, 2014.
Get The New Paper for more stories.