EPL: Roon's Exit? Shut up or get out 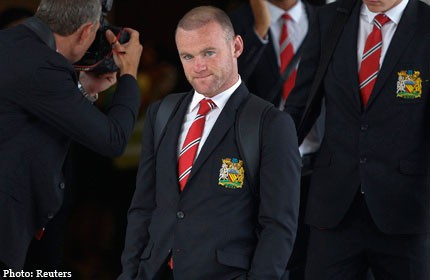 Wayne Rooney is once again putting himself before Manchester United despite having been pardoned and accepted back into the fold, undermining the club's most important pre-season campaign in years with his own selfishness.

I could have told you that years ago. Angry and confused is Rooney's base setting.

But if he has anyone to be angry with, it's himself. And if he's confused, he should pay more attention.

It was Rooney who whined to Manchester United in 2010 that they weren't making the right calibre of signings.

When they did, in the form of Robin van Persie, it was Rooney who whined about having to fight for his place in the team.

That's why there's so little sympathy for his position. That's why when Chelsea officially tabled a bid for the England international yesterday, many Manchester United fans were furious that the club didn't say yes.

Rooney was fortunate that those United fans accepted him back into the fold after what he did three years ago.

With Manchester City reportedly interested in his services, the Englishman went public with his criticisms of his club and handed in an official transfer request.

Not many players come back from that, not at a club like United.

To make another request in May, as Sir Alex Ferguson claimed but denied by Rooney, was extraordinary.

There are no prizes for guessing the source of these most recent quotes either.

Once again, Rooney is putting himself before the club, undermining the most important pre-season campaign in years with his own selfishness.

There is an opportunity here for David Moyes to assert his authority and send a message out to the entire dressing room.

In one fell swoop, he could tell the world that he's not going to be pushed around by any player, no matter how famous he is.

He should be forced to either shut up or get out. Rooney is not so crucial to the cause that he cannot be sacrificed.

United have van Persie, Javier Hernandez and Danny Welbeck and Moyes is likely to play with only one striker.

Given that Rooney's form at the end of last season was so woeful, you would have to question why Moyes would put up with his attitude.

Rooney simply hasn't contributed enough to the cause recently to be worth this hassle.

Reports have suggested that he feels he deserves better after, "nine years of service", but he should know that that nine years count for nothing at Old Trafford.

If you want an easy life, if you want past glories to protect you, don't play for a team like United.

When you play for one of the biggest teams in the world, you have to prove yourself every single day.

There is, obviously, a world-class player still in there somewhere. Rooney was the brightest talent to emerge from English football since Paul Gascoigne.

Perhaps Moyes still believes that he can reignite his form and help him achieve his potential.

Perhaps though, that time has passed.

A move might help, but only to a point.

If he wants to enjoy the longevity of players like Paul Scholes and Ryan Giggs, Rooney has to be willing to put in the work, on and off the pitch.

Right now, there's no guarantee that he will.

Now that Chelsea have officially made a bid for Rooney (which reports say United have rejected), it is interesting to see if there are any good poker players in United's boardroom.

It's the only logical explanation because, frankly, if I was in charge, I would have accepted the offer in a heartbeat.