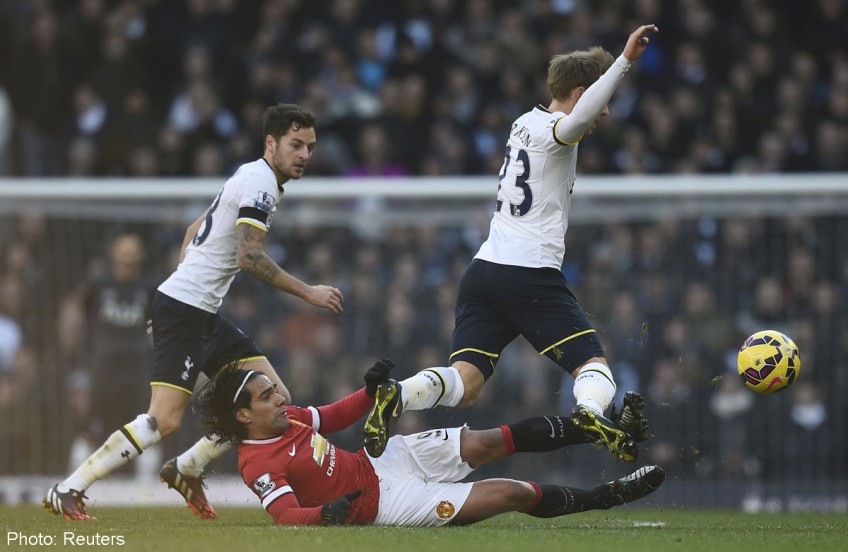 Manchester United named their first unchanged first 11 in consecutive league matches for the first time since Nov 2012. What did you make of that?

HOUGHTON: I think the move backfired.

Louis van Gaal said after the match that he felt it was the best 45 minutes of football his side had played in the first half this season, and I completely agree with that.

But, in the second half, the whole team looked tired.

Tottenham started the match brightly, but I felt the Red Devils had the better opportunities, more control and possession of the ball, and showed really good movement.

United have been unconvincing in some of their recent wins but they were great in the first half yesterday.

In you opinion, what could van Gaal have done differently in terms of selection?

You look at the squad and there didn't seem much he could have done differently, especially with stars such as Angel di Maria and Daley Blind out injured.

It's difficult. But then again, when you're Manchester United, you're expected to have options.

Perhaps he could have left either Falcao or van Persie on the bench.

One of them could have come in in the second half to give the attack a boost.

In the end, he made three substitutions and all the players he brought on - Rafael da Silva, Chris Smalling and Luke Shaw - were defenders.

Was it wastefulness or the heroics of Spurs goalkeeper Hugo Lloris the reason behind United's failure to score?

I felt it was the latter. In fact, both goalkeepers were excellent today.

Lloris and David de Gea were commanding in their own box, led their backlines well and they bailed their team out of trouble a number of times by dashing off their lines.

United were wasteful only in two instances.

The first was in the 22nd minute, when Juan Mata's free-kick struck the post and United failed to put the ball in during the scramble in the six-yard box.

The other was in the 39th minute, when van Persie brilliantly took down Michael Carrick's pass, but he took an extra touch and Lloris was able to clear the ball.

Was Tottenham midfielder Benjamin Stambouli lucky to escape with just a yellow card for his 24th-minute challenge on Carrick?

I was at White Hart Lane doing commentary for radio and, the moment that tackle flew in, I said: "He's off."

The challenge was high, it was reckless, and Carrick was lucky it just grazed his knee.

It was the type of tackle that could have damaged his ligaments or even broken his leg.

Having said that, United were on the receiving end of some fortuitous decisions by the referee.

Three minutes before the end, Wayne Rooney clearly wrestled Tottenham striker Harry Kane to the ground in the box, and the referee should have awarded a penalty.

There was another situation, in the 70th minute, when Ashley Young - who was on a yellow card - pulled back Andros Townsend but the referee again bottled it.

Had the free-kick been given, Young would have received his second booking and United would have been down to 10 men.

Rooney did not seem to have the same freedom he had in recent games, like when he scored twice against Newcastle on Boxing Day. Why do you think that was so?

I felt he was influential in the first half, and had that one good opportunity when his header was saved by Lloris.

But, like the rest of the team, he looked tired in the second half.

Rooney tried to play Mata into good positions but it just didn't work out for him.

One thing I felt was odd, though, was that United didn't focus their attacks through Young in the second half, since he was their brightest spark in the first.

He put in a number of dangerous balls into the box but, bafflingly, United didn't continue that after the break.

Ray Houghton is a former Liverpool midfielder who played for the Reds from 1987 to 1992, winning two league titles and two FA Cups, and for the Republic of Ireland in the World Cup Finals in 1990 and 1994.

He is now an ambassador for the Football Association of Ireland and also works as a co-presenter on UK radio station talkSPORT.

This article was first published on Dec 29, 2014.
Get The New Paper for more stories.