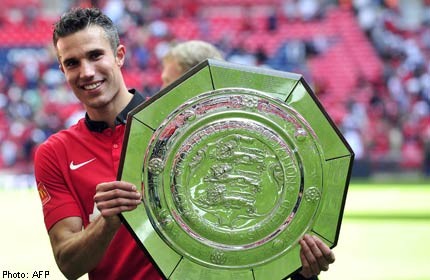 Manchester United fans might be concerned that they haven't made any big signings this summer, but at least last season's big signing continues to excel.

Robin van Persie's brace was enough to secure the Community Shield on Sunday and spare his new manager an awkward competitive debut.

In the vast expanses of Wembley Stadium, the Dutchman was a constant beacon for his teammates. Unruffled, unfussed and unstoppable in front of goal.

With the unhappy Wayne Rooney continuing to push for a move to Chelsea, David Moyes must be delighted to have van Persie at his disposal. Indeed, he may have wondered to himself, "Who needs Rooney anyway?".

This was a virtuoso performance from van Persie, one that confirmed, as if it ever needed confirmation, his place in the top bracket of Premier League stars.

And to think, there were those who wondered if last year's move might be folly, given his long-standing problems with injury.

It was van Persie who started and finished the move that led to United's opening goal as early as the sixth minute.

First, he looked out to the left and pushed the ball wide to Patrice Evra.

Then he rose above the melee to smartly nod the ball into the corner of the goal.

His second strike owed more than a little to good fortune, his shot taking a heavy deflection off the unfortunate James Perch, but you make your own luck in the final third by being brave enough to take your chances.

Van Persie exuded that confidence throughout the game, something that will certainly have reassured his manager.

This was a tense afternoon for United, the first tentative steps under a new manager with nerves and obvious rustiness in the ranks.

Having a striker of this class, as a footballer and as a man, made all the difference.

It's a new season with a new manager, but one thing remains the same.

Van Persie is still one of the Premier League's most potent forces in front of goal.

For all of their spending, Manchester City and Chelsea must have wished they had someone of his class.