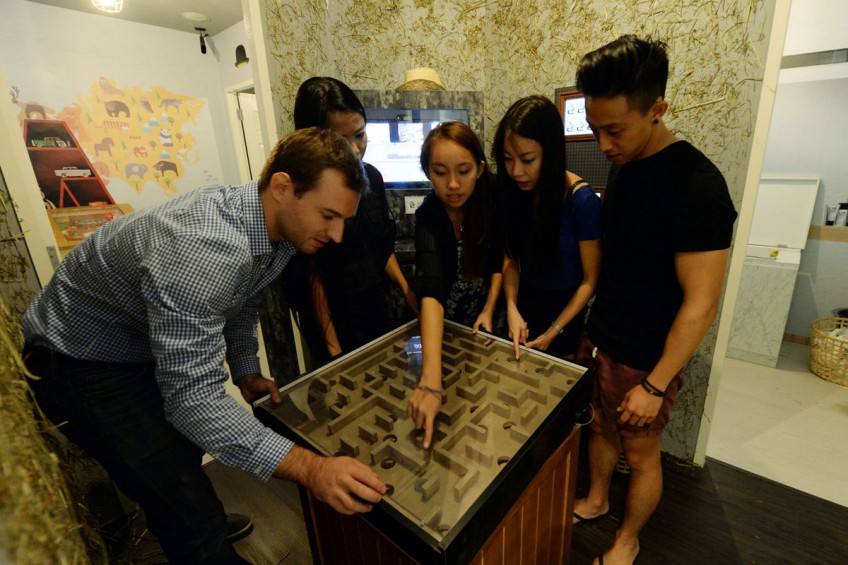 Players in a replayable escape game at Lockdown Singapore.
The Straits Times

Hiding from zombies or breaking out of a maximum-security cell - these are among the many scenarios that puzzle lovers can immerse themselves in when picking an escape game room.

For the past three years, escape games have become popular in Singapore and operators say they are here to stay, despite the growing competition.

In an escape game, customers generally pay $20 to $38 each to be "trapped" in a room with friends for around an hour. To get out, they must solve puzzles with logic, teamwork and other skills.

Such games are believed to have originated in Japan and Hungary about five years ago. They first came to Singapore in 2012, and the following year, at least three escape room firms opened here. Now, there are more than 10.

While companies here reported strong revenue growth from October 2013 to early 2014, when interest peaked, some say that growth has stagnated over the past year. However, it is not game over, they said. They still yield a profit and have been reinventing themselves to sustain interest.

Mr Jonathan Ye, 31, co-founder of Lockdown Singapore, introduced two new game rooms last month, in addition to a replayable game it launched over a month ago. Its revenue doubled between July 2013 and January this year, according to Mr Ye. It also opened branches in Kuala Lumpur and Jakarta this year.

Mr Ye likens the growth of escape room firms here to the 2001 bubble tea craze when many shops opened in a short span of time. But he believes the number of escape game firms is likely to fall soon. Other shop owners, however, believe there is still a large, untapped market here.

Mr Benjamin Tan, 29, owner of The Escape Hunt Experience Singapore, said almost 90 per cent of his customers are first-timers. They include walk-ins and corporate bookings, which make up about 30 to 50 per cent of customers.

Some companies offer perks that entice puzzle-lovers to try out more than one game room.

At Lost SG, first-time players who "escape" without hints become members of the "Lost Elite" and get a commemorative T-shirt. Company co-founder David Chong, 27, said he has given out more than 300.

Companies have also branched out to organise large-scale events.

The Escape Artist, for instance, launched its third and latest event, Escape From Reverie, in partnership with the National Library Board on Oct 3, involving up to 1,000 participants.

Instead of simply solving clues to "break out" from a locked room, gamers progressed by going up the floors of the National Library building in Victoria Street.

Meanwhile, independent organisers are also jumping into the fray.

One of the organisers, lawyer Azizul Kamal, 27, believes that the trend is here to stay.

"Experiential entertainment is definitely the next frontier," he said, as people gain unique experiences that "cannot be duplicated".

Underscoring the popularity of escape rooms in Singapore is the wide variety of puzzles, genres and storylines available. Various skills come into play, including hand-eye coordination, logic, observation and memory. Some involve general knowledge and mathematics.

Solving physical puzzles to obtain codes
Use of keys and padlocks

Immersive
Use of electronics in puzzles
More automation, clues activated in response to actions

May involve fixed location, like a stadium or hotel building
May also be islandwide, similar to a treasure hunt