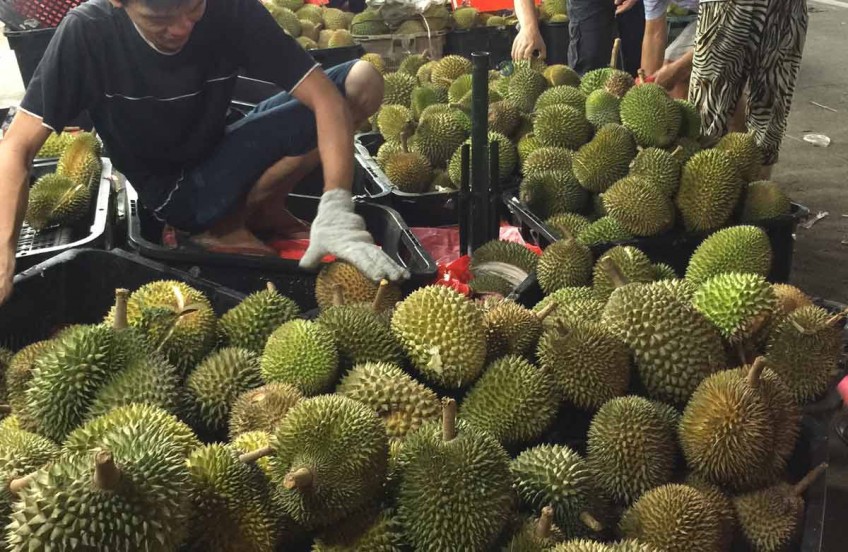 Durian lovers are in for a big treat as the harvest for the king of fruits this season is better than last year's - and that could mean lower prices all around.

Fruit and vegetable wholesaler Chit Huat's sales manager, Ms Tan Shuqing, said this was due to good weather. "There is a durian cycle in which every 15 years, the harvest is very good and the trees grow very well. There is a twofold increase in the durian harvest this year," explained the 34-year-old.

Both Ms Tan and Mr Wong also said Singapore is seeing an increase in supply because of the Muslim fasting month of Ramadan in Malaysia. "Durian sales in Malaysia slow down due to Ramadan because there is less demand and so they will push out to Singapore," said Mr Wong.

And that has seen prices plummet in some places.

Chinese newspaper Lianhe Wanbao reported yesterday that the Mao Shan Wang variety - a top choice for durian aficionados - can be bought for as low as $9.90 a kilogram in Geylang, down from the usual $18. The price of Red Prawn durians has also plummeted from $12 a kg to just $2.90.

For those on a smaller budget, one durian store owner said that cheaper varieties can be picked up at 50 cents a fruit.

Wholesaler Ms Tan said generally, durian prices - regardless of variety - are lower this year by 30 to 40 per cent compared with the middle of last year. But she said that "prices will still differ from shop to shop because of quality".

Fruits Top 1 Department Store, which has branches in Geylang and Toa Payoh, said good harvests in Malaysia may not mean more of the spiky fruit for Singapore. Owner Teoh See Aik, 38, said: "Factories in Malaysia use them to make durian puree, and they are also exported to China for consumption."

But Mr Arthur Gan, 38, who runs the 30-year-old family-owned Durian Lingers, which has shops in Bukit Timah and Sengkang, assured durian fans that there are enough for everyone. "People in China caught on to durians in the last two years and the supply to Singapore was affected and prices were high. But this year, we won't be affected because of oversupply."

Here are some tips on how to pick a durian

Experts never smell the base of the durian. Mr Goh Kwee Leng, 58, owner of 717 Trading, says: "The base of the husk is the thickest part so it is harder to smell the aroma of the fruit."

Instead, sniff along the seams or split lines of the durian - you should smell a slight fragrance. If there is no aroma, the durian is unripe. If the aroma is too strong, the durian is probably over-ripe.

The best durians are oval or slightly oblong in shape. Odd-shaped fruit are likely to have fewer chambers inside and so fewer flesh-covered seeds.

A perfectly round durian may have sub-standard fruit because it is usually less aromatic and the seeds are usually bigger and the meat less fleshy and creamy.

Trick of the trade

Some sellers try to push durians that have been rejected by other customers. Watch the vendors to ensure that they are opening a new durian.

Instead of prodding the flesh-covered seeds when the seller presents an open fruit, customers should taste the durian. If it is bad, or not the variety promised, they are not obliged to buy it, sellers say.

Mr Richard Woo, 40, general manager of Four Seasons Durian Cafe, says: "When you pinch or prod the fruit, you are touching only the skin and not the flesh, so there is no way to tell if the fruit is good. Taste it instead, that way you can really tell if the durian is any good."

To make sure a seller isn't passing off a lesser durian as a Mao Shan Wang, look for prominent seams radiating from the base of the durian. The seams are lines where the spikes of the durian run parallel to each other. The base of a real D24 durian has a flat round spot about half the size of a 5-cent coin.

This article was first published on June 21, 2015.
Get a copy of The Straits Times or go to straitstimes.com for more stories.