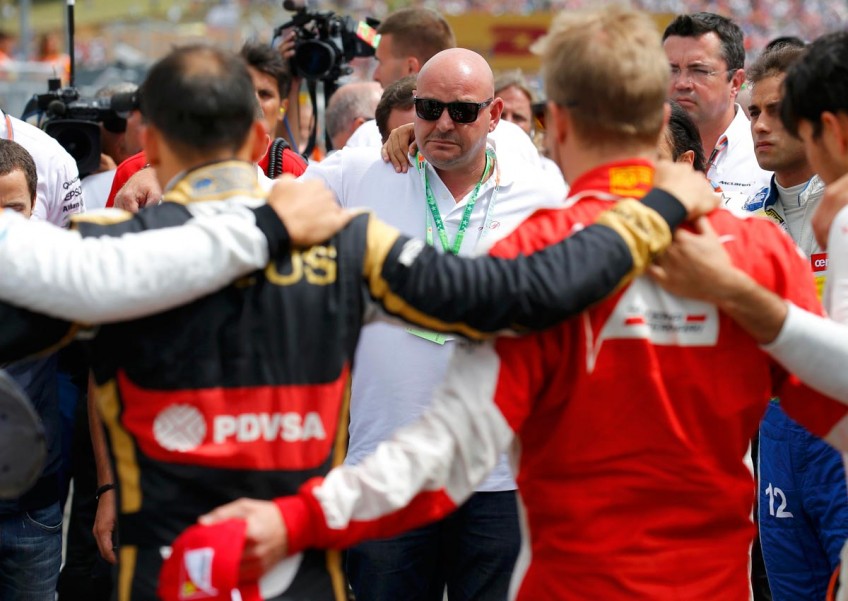 Philippe Bianchi (C), the father of Jules Bianchi, and Formula 1 drivers observe a minute's silence in memoriam of late French Formula One driver Jules Bianchi before the Hungarian F1 Grand Prix at the Hungaroring circuit, near Budapest, Hungary on July 26, 2015.
Reuters

TOKYO - Formula One will make an emotional return to the scene of Jules Bianchi's fatal crash this week in what promises to be a sombre Japanese Grand Prix.

Bianchi died in July, nine months after suffering severe head injuries in a collision with a recovery vehicle in rain and fading light, and the race at Suzuka is set to be a difficult occasion for drivers and team officials.

Hamilton's advantage over Mercedes team-mate Nico Rosberg has been cut to 41 points with Ferrari's Sebastian Vettel a further eight points back after the German's surprise victory in Singapore.

But the Briton, who won in Japan last year as news of Bianchi's crash filtered through to shocked drivers, has promised to hit back in Sunday's race as he looks to equal boyhood hero Ayrton Senna's 41 career wins.

Hamilton warned: "I was fast and on form and I will make sure I bring that out to Suzuka."

After winning seven of this season's 13 races so far, victory this weekend would put Hamilton tantalisingly close to a third world title with just five races to go.

However, the memory of Bianchi's sickening crash will be at the forefront of many people's minds.

"Jules is never far away from our thoughts," Manor Marussia sporting director Graeme Lowdon told Autosport.com. "We're now going to Japan, and we have to be strong.

"We know it's going to be difficult," he added. "But equally we know Jules was a racer and would want to see the team focus on the job of racing."

Bianchi became the first driver since Brazilian triple world champion Senna, at Italy's Imola circuit in May 1994, to die from injuries suffered during a grand prix weekend when he passed away on July 17.

His accident occurred towards the end of a wet race when, with light fast deteriorating, Bianchi's car skidded off the track and smashed into a crane picking up the Sauber of German Adrian Sutil, who had come off at the same spot a lap earlier.

Television footage of the incident, which was not broadcast publicly but was posted online, showed the Marussia's roll hoop torn off in the impact as Bianchi's car ploughed under the crane.

The findings of an investigation into the crash prompted Formula One to make changes to its safety regulations, allowing a "virtual safety car" so stewards can neutralise a race in hazardous conditions.

In the wake of Bianchi's crash -- and criticism of Suzuka organisers for not doing so despite the atrocious weather -- the start times of some races were also brought forward to prevent drivers having to race in poor light.

Meanwhile, Red Bull's recent threat to quit F1 if it cannot find a competitive engine following Renault's decision to stop supplying engines will be the subject of continued paddock chatter in Japan.

And Britain's Jenson Button is reportedly poised to announce his retirement after failing to negotiate a contract extension at McLaren.

[[nid:143739]]
SUBSCRIBE TO OUR NEWSLETTER
Your daily good stuff - AsiaOne stories delivered straight to your inbox