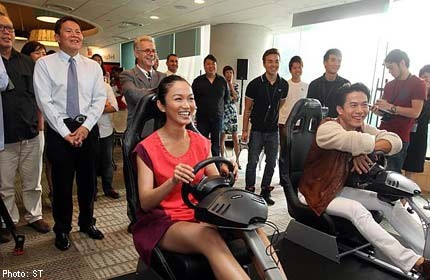 SINGAPORE - Believe it or not, there is a high chance a Singaporean will take the chequered flag at the Marina Bay Street Circuit next month.

The virtual one, that is.

As part of a series of activities ahead of this year's Formula One Singapore Grand Prix, title sponsor SingTel is conducting an island-wide search for the nation's fastest driver on the official F1 Xbox video game.

Virtual drivers with the fastest lap times from four roadshows will be paired with a local celebrity in an ultimate race finale, with the eventual winner sent on a three-day F1 driving experience in France.

Other promotional activities, which the local telco has designed to incorporate "Singapore style", include a reality television-like programme that tests this year's eight SingTel Grid Girl finalists on their knowledge of the city.

It is SingTel's bid to create a race with a unique local flavour and where as many locals as possible can be involved in the race weekend from Sept 20-22.

Another first for the sixth edition of the only full night race on the F1 calendar: The winner's trophy is designed by a home-grown company, Risis.

"We are constantly looking for ways to capture the hearts and minds of Singaporeans with unique F1 experiences," said SingTel's Singapore country chief officer Allen Lew.

"This year, we're going local on all fronts."

Added Michael Roche, executive director of Singapore GP: "We don't want it to be an elitist event only for highly affluent people."

Added Lew: "We want to create something uniquely local so that everyone feels the same buzz that we do when this time of the year rolls around.

"We do all this because more than anything, we want to engage Singaporeans. This is, after all, our nation's race."