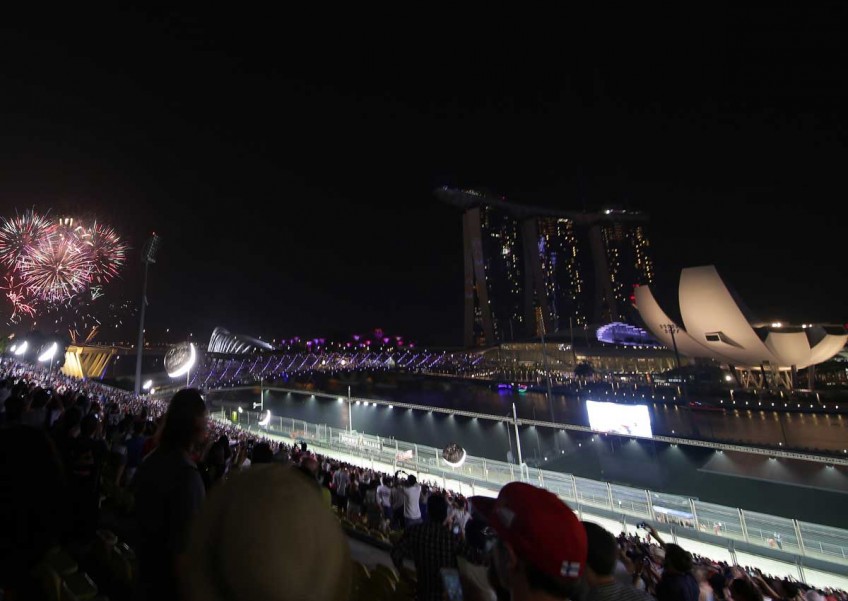 SUCCESS FORMULAE: The bright lights at the all-night race
Reuters

Bob Constanduros, who has been conducting track commentaries at every Formula 1 race since 1985, believes there could be further evolution in the race package of the Singapore Airlines Singapore Grand Prix.

After serious worries over the haze situation, the weekend turned into a roaring success for the organisers, with a total audience of 260,912 fans thronging the Marina Bay street circuit over three days of racing.

Speaking to The New Paper after Ferrari's Sebastian Vettel stormed to victory on Sunday night, Constanduros said: "I know that the worst thing organisers here want to hear is that the Singapore Grand Prix is consistent.

"What they want to do is to surprise each year and I believe they have been doing that. How they do it is a good question.

"It could involve a change in the layout of the track but whatever they do, they want to see an evolution of the night race."

Organisers Singapore GP said the turnout this year was the third highest after the inaugural race in 2008 and the sixth edition two years ago.

The street race - the only full night Grand Prix on the Formula 1 calendar - is one of a handful of venues (there are 19 stops this year) that consistently pack in the crowds.

The others are the Monaco, British, Australian and Canadian Grands Prix.

Organisers Singapore GP aim for magic at the Marina Bay street race each year, and director Jonathan Hallett said: "One of the fundamental keys to the success of the Singapore Grand Prix has been our determination to keep looking ahead, not back.

"That means assessing what we have done each year, and what we can do differently the next year to improve the event even further.

"This is particularly true as Formula 1 itself responds to a fast-changing social environment and competes with other sports for the world's attention."

With coverage of the race beamed "live" worldwide to an audience of nearly 100 million fans, and an average 40,000 tourists attracted to the event each year, the impact on the economy is significant.

Singapore Tourism Board director of sports Jean Ng said that since 2008 it has pulled in "more than 300,000 international visitors collectively and generating an average of nearly $150 million incremental tourism receipts each year".

While it costs just as much to stage the night race, most of it is contracted to local companies who provide jobs for about 20,000 people.

"Local businesses such as our small and medium-sized enterprises have been actively involved in race preparations and operations, such as circuit set-up, ticketing and security services," said Ng.

"Over 80 per cent of Singapore GP's race organisation are sub-contracted annually to these SMEs."

Now eight years old, the Singapore Grand Prix was able to weather the economic slowdown in 2009 when most other races on the calendar suffered a drop in attendance.

For a nation that does not enjoy an established motorsports culture, it is an impressive achievement.

Two big reasons for the success of the Singapore Formula 1 race are its unique place as a night Grand Prix in the heart of the city and the light-up by a world-class entertainment programme off-track.

The concerts during the three days of racing each year have become a huge draw, not only for local fans but also those from overseas.

Beyonce, Mariah Carey, ZZ-Top and the Killers have thrilled fans here, and this year's headline acts were Maroon 5, Pharrell Williams, Spandau Ballet, Jimmy Cliff and the biggest of them all, Bon Jovi.

So successful is the formula it has become a template used in part or whole by new host cities and existing ones that hope to boost sagging attendances.

After the inaugural race here, Malaysia held post-race concerts at Sepang from 2009. Later that year, Abu Dhabi kicked off its inaugural event as the first twilight Grand Prix with a post-race Aerosmith concert.

To boost their audience, Bahrain turned on the lights last year and Russia has plans to do the same in 2017.

But Singapore continues to stand out.

Damon Hill, who won the 1996 world title with Williams, is a regular face in the paddock every year and has described the Singapore Grand Prix as a must-visit event.

But he was hard pressed to give ideas on what else to do to enhance the race experience for fans.

"It's one of the best races of the year, I don't know how you can make it any better than it already is because Singapore GP are doing all the right things. That is a good problem to have," said the 55-year-old.

Singapore GP are expected to enter negotiations with Formula One Administration next year on whether to extend the current contract when it expires in 2017.

If it is to continue generating positive numbers, Singapore GP and partners like the Singapore Tourism Board must continue to dig into the box of magic tricks.

"We certainly look at the overall experience which our patrons look forward to each year," said Hallett.

"Already, before the 2015 Singapore Grand Prix had been run and won, we've had a number of exciting experiences in mind for 2016 and beyond.

"As ever, the message is: Watch this space!"

l The writer is a freelancer.