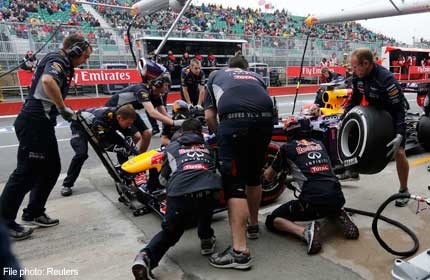 LONDON - Formula One champions Red Bull have changed their split-second pitstop procedures after a rear wheel flew off Mark Webber's car in the pitlane in Germany last weekend and injured a television cameraman.

A investigation carried out by the team in the wake of the Nuerburgring incident found that Webber's car was released prematurely because a 'go' signal was sent accidentally by the right rear wheel man.

The report, sent to all teams and the governing FIA, revealed that the right rear nut cross-threaded as the wheel went on during a German Grand Prix pitstop that lasted less than three seconds.

When the mechanic with the wheel gun removed the nut to put another on, the gun slipped in his hand and he accidentally depressed a trigger that sent a 'go' signal to the man on the front jack.

The car was then cleared to leave the pits even though the rear wheel was unattached.

Red Bull said they would revise the design of the wheelgun to ensure that, if it accidentally rotated in the mechanic's hands, the 'go' signal could not be sent by accident.

The front jack man would also be instructed to hold the car, in the event of any problem, until receiving a clear signal that all wheels had been changed.

British cameraman Paul Allen, working for Formula One Management, suffered a broken collarbone and fractured ribs after being hit in the back by the bouncing 10kg wheel.

The incident has led to a clampdown on access to the pit lane during the race weekend.

The International Automobile Federation decreed this week that media would be restricted to the pit wall and only authorised team personnel and event marshals would be allowed in the pitlane during qualifying and the race.

The BBC reported that FOM has subsequently told broadcasters the measures will also apply to all free practice sessions on safety grounds.