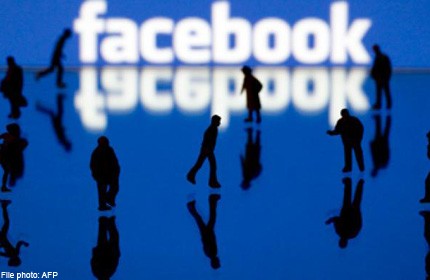 WASHINGTON - People who use Facebook may feel more connected, but less happy.

A study of young adults released Wednesday concluded that the more people used Facebook, the worse they subsequently felt.

"On the surface, Facebook provides an invaluable resource for fulfilling the basic human need for social connection," said University of Michigan social psychologist Ethan Kross, lead author of the study.

"But rather than enhance well-being, we found that Facebook use predicts the opposite result - it undermines it."

The researchers recruited 82 young adults who had smartphones and Facebook accounts and assessed their subjective well-being by texting them at random times five times a day for two weeks.

The researchers said the study, published in the scientific journal PLOS, was believed to be the first measuring Facebook's impact on happiness and life satisfaction.

"This is a result of critical importance because it goes to the very heart of the influence that social networks may have on people's lives," said University of Michigan cognitive neuroscientist John Jonides, another author of the paper.

The researchers monitored the study group by asking them how they felt, whether they were worried or lonely, how much they used Facebook and how much they interacted "directly" with people.

"The more people used Facebook at one time point, the worse they felt the next time we text-messaged them," the researchers wrote. "The more they used Facebook over two weeks, the more their life satisfaction levels declined over time."

In contrast, personal interactions led people to feel better over time, they noted.

The scientists also found no evidence that Facebook use was merely a symptom of feeling low. People were not more likely to use Facebook when they felt bad, although they did use the social network more frequently when they were lonely.

"It was not the case that Facebook use served as a proxy for feeling bad or lonely," Kross said.

Yet the researchers stopped short of claiming the same effect for all Facebook users or other social networks.

"We concentrated on young adults in this study because they represent a core Facebook user demographic," the study said.

The study comes a week after British researchers published a report concluding that frequent photo posting on Facebook can damage real-life relationships.

The discussion paper led by David Houghton of the University of Birmingham said Facebook photo postings, especially of oneself, are not always welcomed by less intimate friends.

"People, other than very close friends and relatives, don't seem to relate well to those who constantly share photos of themselves," Houghton said.

The researchers pointed out that while Facebook creates a homogenous group of "friends," most users have different types of relationships with those viewing their postings.

"It's worth remembering that the information we post to our 'friends' on Facebook actually gets viewed by lots of different categories of people: partners; friends; family; colleagues and acquaintances; and each group seems to take a different view of the information shared," the researcher said.