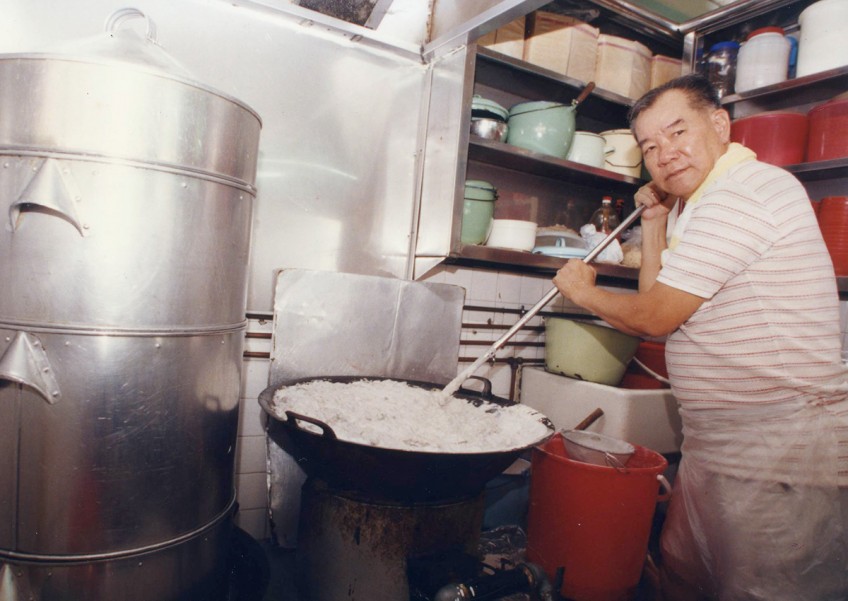 He served up 26 platters of yam cake and six platters of radish cake daily, taking 11/2 hours to steam each batch.

Ah Lo Cooked Food in Chinatown Complex is not new. Their yam and radish cakes are neither photogenic. But when the stall opens at 5pm, you can already see the queue waiting to buy them. No luxurious ingredients like sausage or mushroom are added, just exceptionally soft and smooth cake like old times. The old man and lady still mash their own yam paste and shred the radish by hand, hence only limited trays are available and it is usually sold out within 2 hours! Read more about it on www.misstamchiak.com or click link on bio.

A photo posted by Maureen Ow (@misstamchiak) on

Even though business was good, the 80-year-old decided to close the stall as he was getting on in years and had no successor.

Shin Min visited the stall on Monday night and found it empty, with shutters drawn and the signboard removed.

A neighbouring stallholder, who identified himself as Mr Lin, 40, told Shin Min that Mr Dai had cleared the stall out early on Monday and left with bags of items at about 5pm.

Mr Lin added: "Mr Dai said that he and his wife were getting on in years and no longer had the strength to keep operating, so they decided to shut down and retire."

He shared that Mr Dai's wife was more than 70 years old, and that the pair would start preparing for business from about 9am every day.

Ah Lo Cooked Food has shut it doors at Chinatown Complex Food Centre. 78-year-old uncle decided to retire. This is the stall that withstand the test of time and continue to serve old school yam cake and radish cake at very fair prices. Sigh...

A photo posted by Maureen Ow (@misstamchiak) on

They would leave only at 8pm after cleaning up.

"Their children would not take over the business so they had no choice but to quit."

At Ah Lo Cooked Food, their comforting steamed yam and radish cakes have no equals - they are wobbly and melt in the mouth - and are a notch above their closet peers. The ones at Classic Cakes the yam/radish cakes are seductively soft and , smooth retains the flavor even when it is cold. #ahlocookedfood #classiccakes #yam #radish #cakes

A photo posted by Makansutra Singapore (@makansutrasingapore) on

He told Shin Min that he felt Singapore should have more cooking classes to encourage young people to learn how to prepare traditional dishes.

He added that such delicacies are a part of the country's culture, one that has been continually eroded as older hawkers retire.