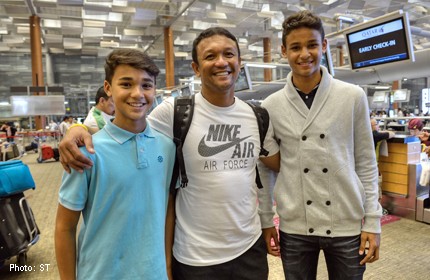 Singapore legend Fandi Ahmad with his sons Ikhsan (left) and Irfan at the airport on Monday morning.

SINGAPORE - Why wasn't he brought home sooner for proper treatment?

That is the question on the mind of Singapore football legend Fandi Ahmad (above), who told The New Paper on Sunday night that he is upset at the way his son Ikhsan's injury has been handled.

Ikhsan had a disappointing end to his Asian Youth Games (AYG) tournament in Nanjing, China, last Thursday, when he broke his left wrist.

The 14-year-old injured himself as he fell during a Group B match against Kuwait, who beat the Singapore Under-14 side 2-0.

He was attended to by a Team Singapore doctor and subsequently taken to hospital for further checks, where his broken wrist was put in a cast.

Fandi's gripe lay in the fact that his son was made to stay in Nanjing for four more days instead of being whisked back to Singapore immediately where he could have surgery, if needed.

Ikhsan returned to Singapore with the rest of the squad on Monday.

"Any parent would be disappointed," Fandi said.

"It's a broken wrist and they've kept him there for four days.

It is believed Fandi is also aggrieved that he only learnt about his son's injury from a Football Association of Singapore (FAS) official in Singapore a day after the Kuwait match, instead of hearing it from someone who was with the team in Nanjing.

FAS general secretary Winston Lee and technical director Slobodan Pavkovic are among the officials accompanying the AYG team, who are coached by Takuma Koga and Stephen Ng.

When TNP contacted FAS on Sunday night, a spokesman said they were aware of Ikhsan's injury.

He added that the team will arrive in Singapore the next day and Ikhsan is scheduled to meet a specialist at Mount Alvernia hospital tomorrow morning.

The national Under-14 team lost all three of their games at this year's AYG.

Ikhsan scored their only goal in the tournament, in a 2-1 defeat by Iraq last Tuesday.

The Cubs then lost 2-0 to Kuwait before going down 4-0 to South Korea on Saturday.