Fandi quits Johor team but will continue to coach 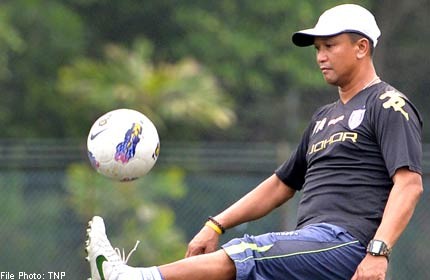 MALAYSIA - What promised to be a dream season ended unhappily for Singapore's Fandi Ahmad (above) as he resigned from big-spending Johor Darul Takzim.

In a statement sent to Malaysian media on Monday night, the 51-year-old confirmed that he is leaving the Malaysian Super League (MSL) side midway through his three-year contract.

Describing the decision to quit the team as "painful", Fandi said: "Life is all about being happy and coaching keeps me happy and I intend to pursue my happiness.

"As a player, I had given my best and, as a coach, I continue to give my best when the opportunity arrives."

A source told The Straits Times that Fandi intends to return to Singapore and concentrate on coaching kids.

In the statement, Fandi also urged fans not to speculate on why he is leaving Johor. He thanked Johor's crown prince, Tunku Ismail Idris, who is also the club's president, for his support.

Speculation has raged on Fandi's swift fall from grace at the side nicknamed the Southern Tigers.

But all was not well behind the scenes as stories emerged that player power conspired to undermine Fandi, who kept urging his men to greater effort to no avail.

Johor finished third in the 12-team MSL and were beaten 1-0 by Kelantan in the Malaysian FA Cup final.

Fandi said: "My only regret is not helping Johor win any trophies despite trying hard.

"However, I believe that under the leadership of Tunku Ismail, it will be only a matter of time before Johor become a force in the Malaysian football scene."

On July 20, Tunku Ismail made a shock announcement on Johor's Facebook page that Fandi was redesignated as assistant coach after former Valencia and Atletico Madrid coach Cesar Ferrando Jimenez was hired to lead the side.

Ten days later, Johor made another announcement on their social media platform, saying that Fandi was relieved of all coaching duties and would be their team manager instead.