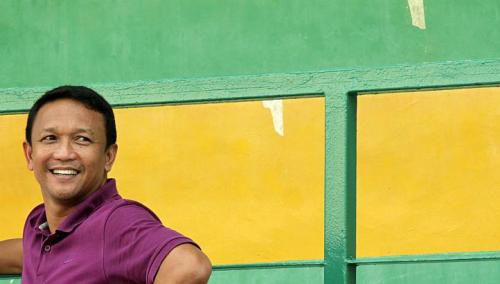 It is a substitution that Singapore football fans will relish: As V. Sundramoorthy vacates the LionsXII coaching post, Fandi Ahmad has been lined up to take charge when the team defend their Malaysian Super League (MSL) title next season.

A source told The Straits Times that the Football Association of Singapore's (FAS) council members will be meeting Fandi over the next few days to work out a deal.

It added: "The FAS is keen to bring Fandi back. He is still highly regarded and his presence will inspire the boys. There is an 80 per cent chance of him leading the team."

Sundram, 48, tendered his resignation from his two coaching posts with the LionsXII and SEA Games teams yesterday. His contract was set to expire in December. He joined the FAS in 2004.

He is set to join Negeri Sembilan, who will play in the second-tiered Malaysian Premier League next season, on Nov 1.

He said: "It was not an easy decision to make - especially since FAS had earlier offered me a very competitive and fair package. I have enjoyed a close relationship with my colleagues and have also received full support from the management.

"However, I believe it is time for me to embark on a new challenge, especially since this would be my first overseas coaching assignment."

FAS general secretary Winston Lee added: "We are saddened by Sundram's decision to leave but we respect his desire to pursue a new challenge. He has played a pivotal role and made significant contributions to Singapore football for the past nine years."

Courts Young Lions coach and former national captain Aide Iskandar, 38, was appointed to lead the SEA Games team ahead of the December tournament in Myanmar.

The FAS would not confirm Fandi's appointment, but said that it will begin the process of hiring a new LionsXII coach.

The move to hire Fandi comes as a surprise, after a public spat between him and the FAS in February.

The former striker gave a fiery interview to The New Paper in which he blasted the FAS, calling it "incompetent" due to the protracted search for a new national coach then.

After Raddy Avramovic's contract expired at the end of last year, it took the FAS until May before Bernd Stange was appointed.

Should Fandi return, it will mark his first job in professional football in Singapore in seven years.

He left in 2006 to take charge of Indonesian Premier League club Pelita Jaya until 2010.

He returned to coaching last year when he joined Johor Darul Takzim, but resigned in August after they finished third in the MSL.