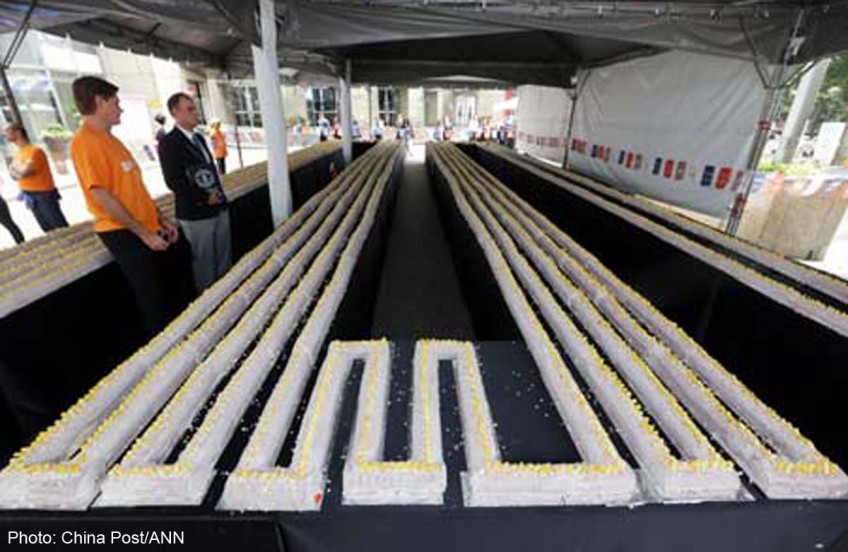 TAIPEI - Shangri-La's Far Eastern Plaza Hotel, Taipei has beaten the world record for the longest roll cake, measured officially by the Guinness World Records yesterday to celebrate its 20th anniversary, according to a press release of the hotel.

Apart from the challenge, a charity bazaar was also held in front of the hotel to share the excitement and love with more people as the net profits of the 900-box sale will later be donated to SOS Taiwan Children's Village in Taoyuan, according to the hotel.

The culinary team deliberated on how to go about creating the roll cake for over a year. It organised meeting after meeting on topics ranging from selecting the cake's flavor to ways of creating such a long roll cake to achieve its goal with perfection.

In addition, the pastry team spent over 300 hours of their spare time for the preparations before the big day, according to the press release.

In order to keep practicing its principle of "Rooted in Nature" as well as to support local farming, the culinary team decided to use selected local ingredients.

After the record-breaking roll cake had been measured, it was sold at a charity bazaar for NT$80 (S$3.50) per piece and NT$960 (12 pieces) per box. Through the sale, the hotel hopes to make the challenging activity not only significant to its staff, but also meaningful to the local community and to society.

The funds donated to SOS Children's Village are the hotel's way of sharing happiness and love with kids in need, the hotel stated.