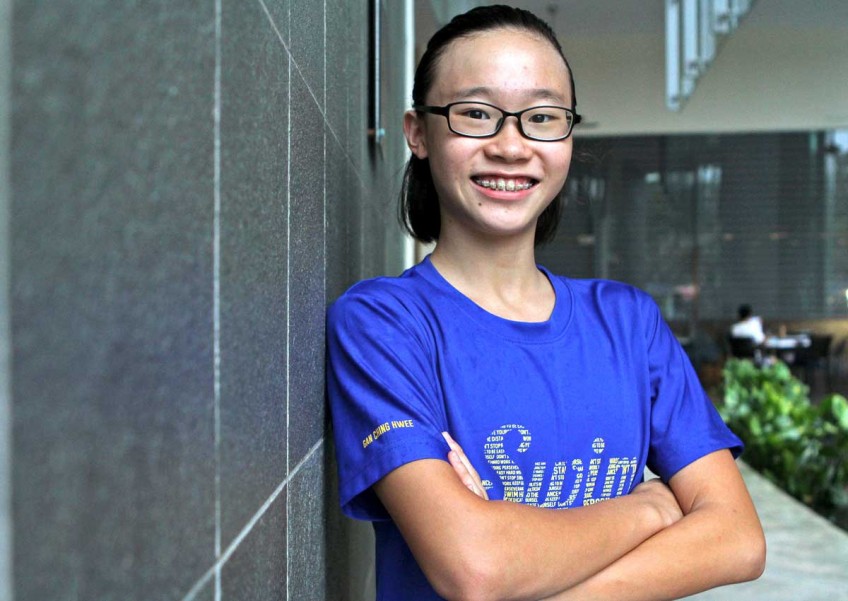 Chinese Swimming Club’s Gan Ching Hwee is likely to make her SEA Games debut at age 13 in KL this August.
The New Paper

"What if my goggles fall off during my race?

"What if I don't execute my turns well?

Worries like these always inundate swimmer Gan Ching Hwee's thoughts before her events.

But, once the petite 13-year-old leaps off the starting block, the doubts vanish, replaced by an unwavering focus on details, such as stroke counts, approaches and turns.

"I will forget everything; I am already there (in the water) and I can't possibly get up and run away, so there's nothing left to do but to finish the race," the Methodist Girls' School Year 2 student told The New Paper yesterday at the Chinese Swimming Club (CSC).

At the OCBC Aquatic Centre, Ching Hwee rewrote Under-14 national records in the women's 200m, 400m and 800m freestyle, as well as the 400m individual medley (IM).

She also met the 'A' qualifying marks for the 400m and 800m free, and the 400m IM for the South-east Asia Games in Kuala Lumpur this August.

Ching Hwee, who said she stood at 1.61 metres tall the last time she measured six months ago, is the youngest among the 12 swimmers who met SEA Games standards at last week's meet.

CSC head coach-designate Eugene Chia said: "She has a knack for understanding what the coaches ask of her, and the awareness in the water to execute those changes.

"She learns really fast." He added that Ching Hwee has a "technically very good" underwater freestyle pull, even though they have focused on her kicking technique in recent months to take the load off an injury-prone shoulder.

The chatty teenager started swimming lessons at CSC when she was 4, together with her brother, who is a year older.

While her brother eventually gave up the pool for the badminton court, Ching Hwee stuck with swimming, while dabbling in golf, badminton, squash, ballet and piano.

"It is mainly the people, the bonds that I have made with my friends in swimming that made me stay in the sport," she said.

"But, of course, good races and achievements also motivate me to stay on; they boost my confidence to do better and work harder." After a three-day break, Ching Hwee returns to the grind today, with the Schools Nationals coming up next month.

A spectator at the 2015 SEA Games at home, she said she was overwhelmed by the "stressful" atmosphere at the OCBC Aquatic Centre back then.

She said nervously: "It was very lively and there were so many people watching; it's a good kind of noise for the crowd, but not the swimmers."

But, nervous as she may be on land, don't bet against Ching Hwee when she is in her element - water - this August.