Fazrul must undergo surgery if he is to play football again 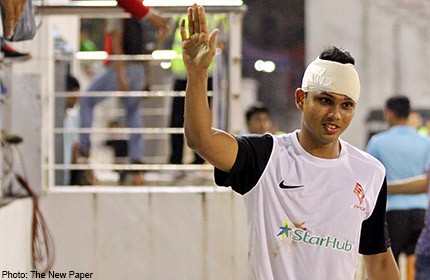 SINGAPORE - Fazrul Nawaz will require surgery if he hopes to return to competitive football.

Together with team physiotherapist Nurhafizah Abu Sujad, the Singapore international and LionsXII striker sought a second opinion on his head injury yesterday.

Speaking to The New Paper, Nurhafizah said: "The doctor recommended surgery for the insertion of a titanium mesh, which is stronger but more malleable than a titanium plate.

"They also found a fracture to his cheek bone, which they plan to correct using the same method as well."

The 28-year-old fractured his forehead during the Malaysia Cup quarter-final, secondleg match against ATM FA in Selangor last Friday, which the LionsXII lost 4-1 - they were knocked out 4-2 on aggregate.

Fazrul, a substitute, was kicked in the forehead in the dying minutes of the game by ATM defender Amiridzwan Taj - he was flashed a straight red card - and was stretchered off, receiving stitches in the dressing room for an ugly gash.

He returned to Singapore on Saturday morning and with Nurhafizah, visited a doctor at the Raffles Hospital.

Checks revealed the extent of the injury and surgery was recommended to insert a titanium plate.

The plate, though, would leave his football career in jeopardy, as it was not as strong as bone.

Yesterday, Nurhafizah said: "If the injury is not corrected and he receives another blow to the same area, there may be brain damage."

Fazrul, who could not be reached for comment yesterday, will discuss the matter with his family, although a date for surgery has been booked for next Thursday, with the costs covered by the player's insurance.

If he does undergo surgery, Nurhafizah said doctors would need to assess how the injuries heal about three months after the operation, before making a recommendation on his playing future.

In the best-case scenario, the hardworking forward can continue playing, but with a protective headgear similar to the one Chelsea goalkeeper Petr Cech uses, for the rest of his career.

Said Nurhafizah: "Fazrul is quite optimistic, he has always been a strong person."