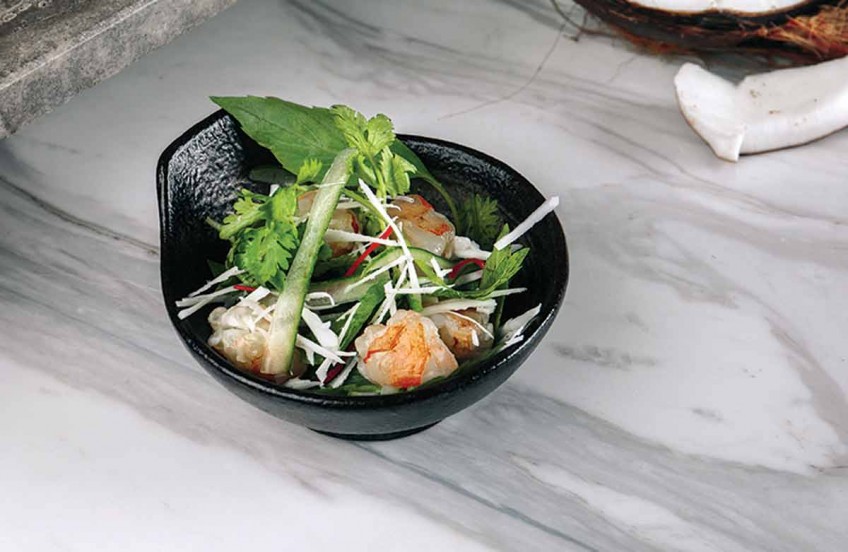 In today's fickle dining scene, where new restaurants are opening up nearly every week and others closing just as fast, 11 years in the business is a major achievement that few can claim, especially one that is not a household name, and has been operating in an off-the-radar location from day one.

But for the past decade and a year, husband-and-wife team Freddie Lee and Purdey Poon have been quietly toiling in the kitchen and dining room of Infuzi, depending on regulars and a non-compromising approach to cooking to get them through the ups and downs of a finicky business.

Chef Lee and Ms Poon were both working at Les Amis before venturing out on their own.

Their location at Biopolis has been both a bane and a boon. It is close to Holland Village, a mere five-minute drive away, and "there was a strong focus on R&D in Biopolis, and we saw potential here", says Ms Poon. But 11 years on, unless you live in the Holland area, or work at Biopolis, few know that Infuzi exists.

"We are still getting people who are surprised to find a restaurant here," says Ms Poon. "But at the same time, our regulars like that we are under the radar, and Infuzi is like their neighbourhood restaurant."

The restaurant which serves Modern European cuisine, leaning towards French, is popular for weekday lunches with the neighbouring working crowd, made up mostly of researchers. For dinners and on weekends, it is mostly the residential crowd.

While they do have their regulars, some of whom have been returning since day one, the couple know they still have to be on top of their game.

Two years ago, they introduced a weekend brunch menu, when diners began asking them for one. The menu includes a duck rillette, Croque Madame, eggs done in different ways, and steak for those who want something heavier.

The couple believe that food will always be the main draw here. They've not changed their decor since day one, not that the restaurant looks shabby. It still retains much of its casual feel, with its indoor and outdoor setting blending seamlessly.

Over the years, they've also tweaked the menu, adding less salt to the food, and making the options lighter, but not compromising on taste and quality.

The set lunch menu, priced from S$32, changes every week, while the ala carte menu is entirely changed every three to four months. "We change everything, except for the Maine lobster pasta," says Chef Lee, of his signature dish. The pasta, S$56, is tossed in home-made lobster oil, and the whole lobster is served without its shell, making it easier to chomp on the crustacean.

Some dishes on the current menu include a swordfish belly carpaccio (S$28), which comes with a little kick from the use of horseradish, and the pan-roasted Iberico pork rack, served with morels and a little veal and beef jus. A small watercress salad cuts through the richness of the juicy pork (S$48). It also happens to be Chef Lee's favourite dish.

He also uses seasonal ingredients when they are available, such as white truffles, white asparagus, and red mullet.

Ms Poon admits that the restaurant does suffer from lull periods. They've thought about relocating to a less obscure location, but have been put off by high rentals. "We very much like this location, and don't want to lose our regulars too," she says.

If you miss Chef Jean-Charles Dubois' lobster bisque, you don't have to wait too long to have it again. Balzac Brasserie, which was previously at the Rendezvous Hotel, closed in January. It is opening next month at the Fort Canning Centre, where Singapore Pinacotheque de Paris, the first international outpost of France's largest private museum, is located.

Balzac Brasserie will return, not only with a new location, but with a new look, and new menu as well. Chef Dubois says he moved out of Rendezvous Hotel as his three-year lease there was coming to an end. It also didn't help that the landlord was raising the rent, and with ongoing construction along Bencoolen Street, there was little human traffic.

"I would love to stay at the old location, but the rental increase was too much, and we were not doing enough covers," says Chef Dubois, who had previously worked at Raffles Grill and The French Kitchen.

He is excited about the new location, which he says is "super cool". Located in the basement of the Fort Canning Arts Centre, it will also have an outdoor terrace space.

"The museum actually came looking for me, even before the lease at Rendezvous Hotel ended, because they were looking to have a French restaurant on the premises," says Chef Dubois. He declines to say how much rent he will pay, but says it is a lot more affordable. The restaurant will be small, seating about 40 inside, and about 30 on the terrace. "Diners can have aperitifs and canapes on the terrace before heading indoors for dinner.

With its close proximity to the Registry of Marriages, Chef Dubois hopes to cash in on this by focusing on catering for small weddings, as well as for corporate events.

He has brought much of the structure from the old Balzac to the new, but is giving the panels and bar counter a new coat of paint. "Before the restaurant was dark, but now it will be much brighter, more casual but elegant," he says.

He will still have his lobster bisque on the menu, but now it will come with a truffle ravioli. The other signature, 48 Hours Braised Wagyu Beef Cheek, will also be on the menu.

"But the other dishes will be lighter to fit its location in the park," says the chef.

He will introduce dishes such as a quinoa salad and chargrilled octopus. The menu will be the same for lunch and dinner. But he will also start service in the mornings, from 10am, offering juices and coffees, and cold platters in between lunch and dinner.

His regulars already know about the new location, and he expects museum goers to be part of the crowd. However, he is also aware that the Fort Canning location is not as accessible as Bras Basah. "But there is free parking here at night, and for the lunch crowd, I'll provide free parking for two hours too," he says.

In addition to setting up Balzac Brasserie at its new location, Chef Dubois has also opened an Indian eatery at Keong Saik Road. Called Indline, it is a quick service restaurant that serves curry and naans, and tikkas fired in a custom-made tandoor.

Diners can either pick an Indbox, where they can customise their meals from an array of curries, tikkas, kebabs, naans and rice, or if they prefer something light, a Salad box or a Kati roll or Indian wrap. The kitchen is headed by Chef Ajim Khan, former executive chef of The Copper Chimney.

But Balzac Brasserie remains the star. Chef Dubois has designed new crockery to go with the food, and has built the kitchen into the restaurant. "Diners will be able to see me plate the dishes at the bar," he says.

The restaurant will also have its own cocktail list.

"The museum is a top notch one, so I'll have to be sure the restaurant is on top of its game too," he says.

After 11 years of running her restaurant Coriander Leaf at its Clarke Quay location, chef Samia Ahad finally decided it was time to shake things up a bit. Last July, she closed the restaurant and spent the next few months updating her concept and preparing it for a relaunch this year.

"We had gotten stuck in a rut and were just plodding along," says Chef Samia, the founder and culinary director of the 14-year-old Coriander Leaf. "If we had stayed (at Clarke Quay) we would've been fine, but I had really been frustrated and bored in the last three or four years. We'd had no growth - there was no inspiration or motivation."

So just earlier this week, she finally re-opened Coriander Leaf at the newly renovated Chijmes with a refreshed menu, a more modern interior complete with an open kitchen, and a larger studio for her cooking school arm. She had also started a catering arm at the end of last year as part of the entire brand's revamp.

"I've actually been looking to move from Clarke Quay for the last few years," says Chef Samia. "When I first moved there, it was an up-and-coming place and we were one of the first. The first four years were actually extremely good for us, but it tapered down as the crowd changed and it became a late night clubbing and drinking crowd more than anything else."

So when a 5,000 sq ft space opened up at Chijmes - large enough to house both her restaurant and cooking studios, she was more than happy to take it up. "I've always loved Chijmes, I think it's a beautiful complex. And now that it's revamped too, it's a lot more happening and we're hoping to attract a more diverse audience here," says Chef Samia.

With the help of her new chief executive officer Aun Koh and Chef de Cuisine Iskander Latiff, they also redesigned their menu from a traditional one with appetisers, main courses, and desserts, into one made up of small plates categories into five "flavour verticals" - Fresh, Familiar, Spicy, Umami, and Sweet.

It's partly a way to stay true to Asian cuisine in general, since Asian food has always been about sharing and not about each person ordering one main course for themselves, explains Chef Samia. It also makes the menu more trendy too, she adds.

As for the cooking school, they can now have up to 12 classes a week in their new premises, as opposed to the three a week that they did in Clarke Quay, and future plans include bringing in big names such as Tetsuya Wakuda and David Thompson as guest chefs to teach classes.

"I hope this (relocation) will take us to a different level," says Chef Samia. "I've always looked to sort of expand, although not necessarily in Singapore. But of course for now we're still concentrating on this and treating it as our flagship."

This article was first published on June 20, 2015.
Get The Business Times for more stories.