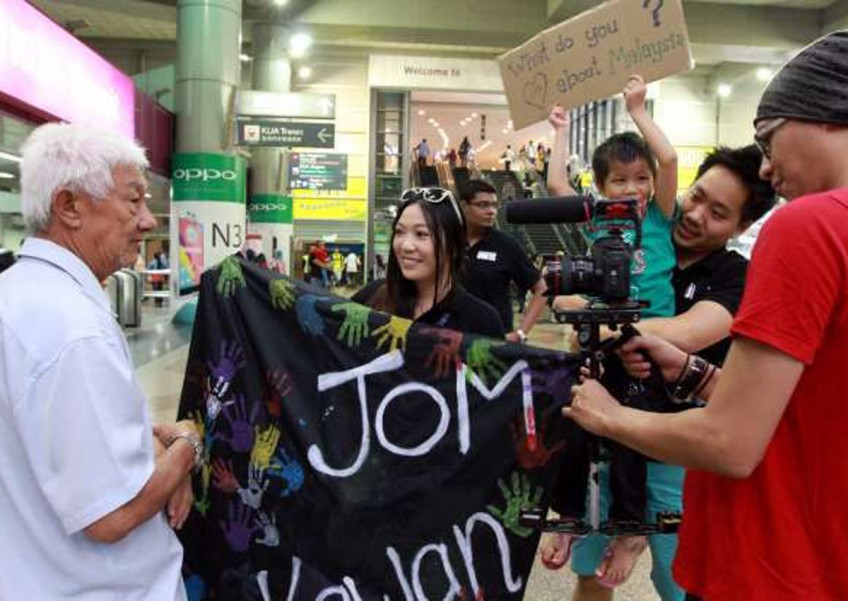 A mat to sit on while taking a break from the hustle and bustle, a packet of nasi lemak to savour and perhaps a round of the traditional game of congkak to flex the mind.

Offer these and some pleasant conversation to passers-by at a busy transportation hub and often, magic does happen. Or more precisely, people rediscover the magic of connecting with strangers who are fellow Malaysians.

Last Sunday, in what they called a unity project, a group of volunteers went to the Kuala Lumpur Sentral railway station. They brought along a mat, packets of nasi lemak, a congkak board and marbles, a piece of black cloth that bore multi-coloured handprints and the words JomKawan (colloquial Malay for Let's Be Friends), and a handwritten sign that asked "What do you love about Malaysia?"

Most importantly, they came with hope and optimism. Project leader Lydia May Wong told The Star that the activity was designed to give people something positive to talk about instead of the current hot topics.

The idea was to reduce the racial and political tension that grips us all. The volunteers wanted to see if they could get people of different races, religions and political stripes to sit and be friends.

They randomly approached people, inviting them to take a load off and spend a few minutes on the mat for a chat. They asked what it was about the country that Malaysians treasured most.

"We were pleasantly surprised with some of the answers and the beautiful display of patriotism within our community," Wong wrote in her Facebook timeline.

The mat became a meeting point for folks of various races and ages. Some people took a bit more time to shed our habit of complaining about the issues of the day but as one volunteer reported, at the end of the conversations, they realised that we should put such things aside and focus on spreading love instead.

"Malaysians are much better than what we think we are," said Wong.

And she is right, of course. The project was a simple gesture but in trying times, such gestures are what we yearn for the most. Only the most selfish and cold-hearted among us are unable to respond to kindness, openness and sincerity.

Our country's issues are complex and it will take a whole lot more than a project like this to address them. But it helps significantly by reminding us of the spirit and values that make Malaysia great.

We could do with more such reminders, especially considering that our 58th National Day is less than four weeks away and 16 days after that, Malaysia turns 52.

We need friendship. We need unity. We need to feel good about being Malaysian. And if achieving and maintaining all that involves nasi lemak, so much the better.