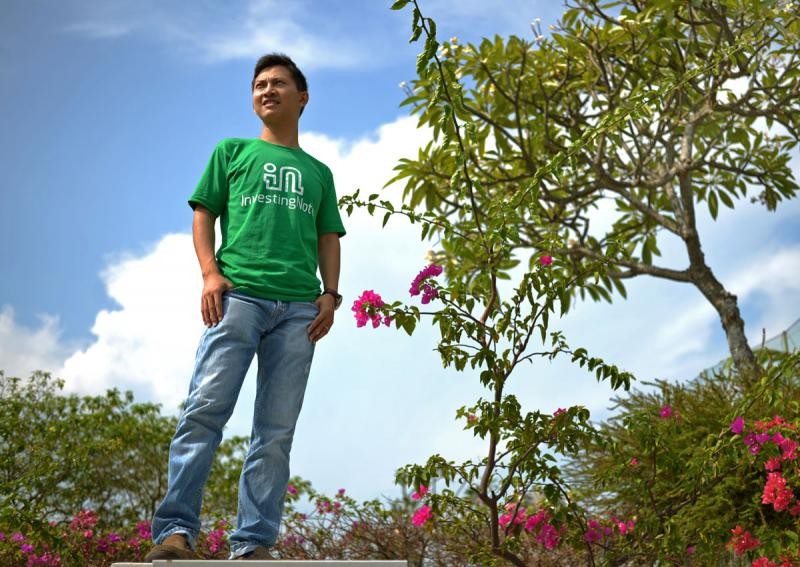 Growing up in a small village in Fujian province, China, Mr Shanison Lin first learnt about business risk, not to mention worker safety, when a mine collapsed and seriously injured one of his father's workers.

Despite the setback, the family eventually earned enough to buy a small building in the nearby town of Datian, which they moved to four years after the accident. There, life got better.

"My father told me that business is like that. If you don't take risks, there are no rewards," said 31-year-old Mr Lin, now a Singapore PR.

And not only has he inherited his father's philosophy when it comes to his investments, he also has the same entrepreneurial streak.

Mr Lin quit his first job at financial portal ShareInvestor and started his own financial tech company InvestingNote in 2014, just five years after he graduated from the National University of Singapore (NUS) with a degree in information systems.

He drew no salary in the first year but a grant from the National Research Foundation's i.JAM micro-funding scheme paid him $1,000 a month. "My father has no idea what fintech is but is very supportive," Mr Lin said with a grin.

Last May, the company raised $400,000 from investors and the National Research Foundation.

A I'm the youngest of five children and my father started his coal mining business shortly after I was born, while my mother took care of us. We lived frugally and my eldest sister had to give up completing primary school when she was eight to look after another sister and me.

I got a scholarship to come here and study in NUS when I was 19.

A I worked at ShareInvestor after graduating from NUS, and as a programmer, my job was to present financial data in a way that was understandable to our users.

I got to track share prices live. Everything was moving so fast and that really intrigued me.

At the time, ShareInvestor was also organising a lot of events where investing experts would come and give talks, so I would go and listen to their advice for free.

My first trade was a sports apparel stock called ChinaSports. The company was founded in Fujian province, so it was something I was familiar with. I invested $3,000 and earned $500 over a month.

That was when I realised I can make money from investing and started doing it more.

Around 30 per cent of my portfolio is reserved for short-term trading. I like trading indices like Dow Jones or China A50 because they trade 24 hours a day, so you can buy and sell quickly, unlike the stock market which closes.

I also do value investing and the other 70 per cent of my portfolio consists of stocks that give higher dividends for the long term.

Actually, there's no "one style fits all" strategy in investing, so I usually combine the information and insights I accumulate from different experts with their own methods in making investment decisions.

I used to go to seminars but now I mostly do "social trading" through InvestingNote, which is like Facebook for stock investors.

Everyone, from remisiers to brokers, can share their ideas on individual stocks, such as a stock's target price and the time frame for hitting it, and give supporting reasons using different types of analysis.

Their posts will be tagged, so you can search for a particular stock or add it to your watchlist to read what other investors are saying about it.

There is a point system to gauge the experts' credibility and the quality of their posts, and everything is free to use.

A My Singapore portfolio value is around $50,000 and most of it consists of long-term, high-dividend- yielding stocks. These are mostly defensive - for example, stocks in the healthcare and telco sectors where people will still spend even if the economy is bad.

Even stocks of banks tend to be quite safe in Singapore because there are only a few banks here, so competition is not that fierce, and the Government has an interest in keeping them afloat.

So I have DBS, Sheng Siong, Singtel and Parkway Life, a healthcare Reit. These give me annual dividend yields of 4 per cent to 7 per cent.

In general, Reits (real estate investment trusts) give higher dividends, but they can be riskier.

For example, when interest rates go up, Reits are negatively affected because they tend to borrow money and have to refinance. To reduce such risks, I make sure the companies I invest in are not too heavily in debt.

If I think interest rates are going to rise, I look at companies that have recently refinanced and locked in the interest rates for their loans for the next few years.

Q What does money mean to you?

A Money means freedom to do the things I am passionate about, like starting my own businesses.

Six months before I graduated, I had my own website development start-up with two co-founders.

After graduation, we continued to work on it for another six months but then had to quit because we weren't earning enough, even though we were really enthusiastic about it.

At the time, I'd just graduated and had to pay for my daily expenses and rental.

A I invested more than $30,000 of my savings in InvestingNote as start-up capital. I'd just got married and bought my HDB flat at the time, so I used up almost everything in my bank account and even sold some stocks in my portfolio to fund the company. We have yet to break even and will hopefully do so in the next three years.

Right now, we are focused on growing the company and expanding to other markets in South-east Asia by next year. We have five staff, including myself, and our revenue was around $40,000 last year.

A I plan to build a portfolio that will give me a passive income of $5,000 a month in 10 years' time so I can pursue the things I am passionate about.

A I'm planning to enter the China market again.

For people looking to invest in China, it is a highly irrational market, so it's better to do long-term investing and look for stocks that give good dividends, like Bank of China and Industrial and Commercial Bank of China. If you do short-term trading, even technical analysis may not work well.

Investing in the Chinese stock market is quite risky. To reduce risks, I use the dollar-cost averaging strategy where you invest a fixed amount of money regularly over a long time instead of investing everything at one go.

Nowadays when I invest, instead of asking how much I can earn from a trade, I ask myself how much money I can afford to lose.

I'm currently not holding any Chinese stocks but will invest again when the Shanghai Composite Index drops to 2,800. Right now, it's about 3,000 and I have put aside 80,000 yuan.

A A four-room HDB flat in Moulmein-Kallang with my wife and two-year-old son. I take public transport all the time.

A I bought this penny stock Innopac at five cents per share after the penny stock crash in 2013.

Because of the crash, Innopac dropped from 14 cents to four cents in two days, but then rebounded to five cents again. I thought it was undervalued and put in $5,000.

I lost more than 30 per cent within the next five days, and my broker called me up and told me to sell and cut my losses.

I didn't sell because I thought it was so cheap, it couldn't go any cheaper. I held it for one more year before selling it at one cent. I lost 80 per cent of what I put in and that taught me to be decisive in cutting losses.

At the time, the SSE was 2,000 and had been there for around three years, so I thought it couldn't possibly go lower.

People were still bearish but I saw opportunity so I took the risk.

But to play it safe, I invested only in the companies starting with 'China' because they are usually linked to the government and so are less likely to become bankrupt and delist.

It then dropped to 4,500 within two weeks. Some people thought it was temporary and still bullish, but I was worried because a lot of people were using leveraged money to buy stocks, so I felt we might be heading for a big crash.

I sold everything and had a 75 per cent return in total over one and a half years.