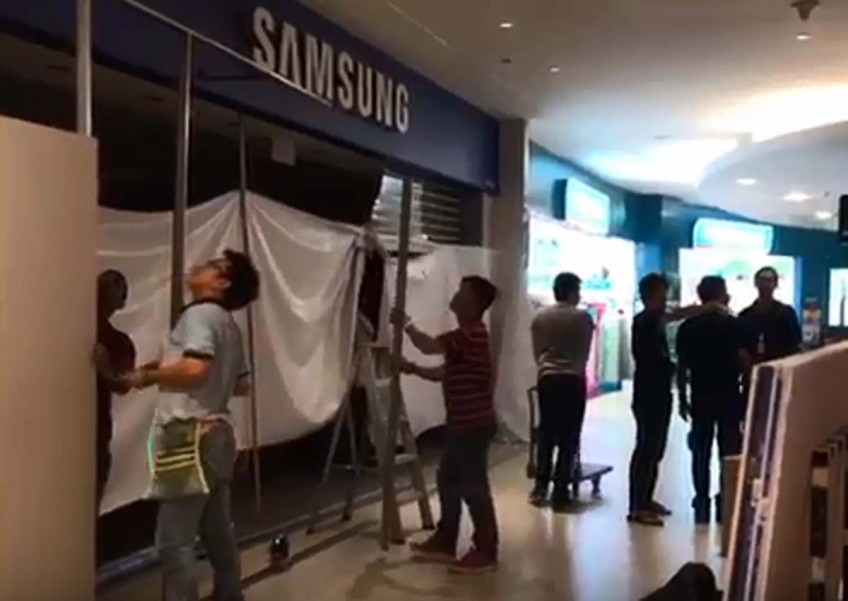 A screengrab of a video showing workers cleaning the area outside the Samsung store as filmed by The Straits Times.

A fire broke out at Samsung Experience Store in Ang Mo Kio Hub (AMK Hub) basement early Tuesday morning (March 28), affecting the business operation of some of the nearby units too.

The Singapore Civil Defence Force (SCDF) said the fire was sparked off by contents measuring 1m by 2m in Samsung unit's storeroom. It was put out by the shopping mall's sprinkler system and SCDF officers who arrived at the scene after the fire was discovered at 1.25am.

A statement from AMK Hub said: "The fire sprinkler in the storeroom was activated and the fire was put out within minutes. No one was injured."

The mall is open for business except for the area with some units near the Samsung store, which has been cordoned off for cleaning and public safety.

Samsung said in a statement its store will remain "temporarily closed during this period". It is assessing the damages and working with the authorities to find out the cause of the fire.

One of the nearby units affected is Fitness First gym, which has informed members on its Facebook page that its outlet is "temporarily closed" due to the fire. It hopes to resume operations as soon as possible.