Fire breaks out a second time at Singapore Poly 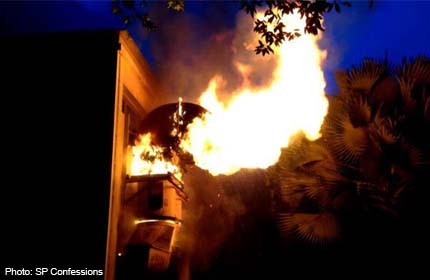 Firefighters had to battle a fire at Singapore Polytechnic for the second time in three days yesterday, after a Malay food stall at a foodcourt went up in flames.

Two stalls were damaged by the fire, which broke out at Block T9 at about 7.15pm.

A 45-year-old stall assistant suffered minor burns to the right side of her face and arm and was taken to the Singapore General Hospital where she was treated.

On Tuesday, a fire broke out at the Dover Road campus, at an office of a teaching block. No one was injured.

Last July, an exhaust duct at another foodcourt at the polytechnic caught fire.

The SCDF said they are investigating the cause of the latest fire, which took place when there were about 20 patrons in the foodcourt.

Said Mr Lawrence Tay, 54, who operates the foodcourt managed by Food Haven: "At that time there were only four or five stalls open. That stall (where the fire started) was about to close."

Ms Angeline Toh, a cleaner, knew something was amiss when she smelt something burning.

"When I saw the stall, everything was already burnt, The stall was black, and it was smelly," said the 50-year-old.