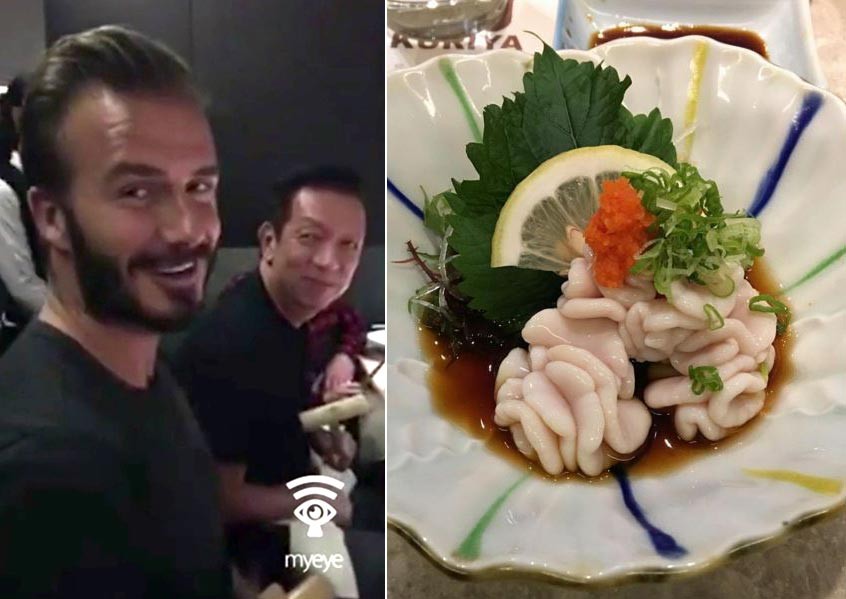 Think you spotted David Beckham in Singapore this week? Your eyes may not be playing tricks on you. Yes, the former Manchester United and Real Madrid footballer was in town earlier this week and it appeared he took the opportunity to try out some interesting cuisine during his time here.

On his Instagram account, Beckham also uploaded images of a couple of dishes he tried, one of them titled "Cod fish sperm... (interesting dish )". Also known as shirako (which means "white children"), the popular winter delicacy in Japan is described by Simonseeks as a "slippery, soft white food" that "melts in the mouth like butter".

It seemed that the former England captain had already left our shores though, as he posted on Facebook photos of himself in Papua New Guinea yesterday. It is his first stop in a round-the-world journey which will see him play seven football matches in seven continents as part of a global charity tour.

The 40-year-old Englishman delighted Papua New Guinean villagers by playing in an exhibition match yesterday, but the Pacific nation's sports minister admitted "a lot of them don't know who this guy is".

Beckham travelled to Mount Hagen in the Western Highlands province to take part in a series of games to raise funds and awareness for the United Nations children agency Unicef.

Sports Minister Justin Tkatchenko told The National newspaper he was humbled PNG was the first port of call for the superstar, one year before his nation hosts the Fifa U-20 Women's World Cup.

But he told the Australian Broadcasting Corporation that some of the villagers playing with Beckham were not be aware who he was.

"Two local teams from two different villagers here in Mount Hagen will be playing with him," Tkatchenko told the ABC.

"A lot of them don't know who this guy is and how famous he is. But those who have access to social media and who play football and have the love for the sport are just over the moon."

Beckham will also visit Antarctica, Argentina, Djibouti, Nepal and the United States before a final game at the very place where he rose to fame - Old Trafford in Manchester on Nov 14.

The game will reunite him with former United manager Sir Alex Ferguson, who will coach a Great Britain and Ireland XI captained by Beckham.

The match will also feature another of Beckham's former managers, Carlo Ancelotti, with the Italian managing a Rest of the World XI led by former France star Zinedine Zidane.

His adventure will be eventually shown in a BBC programme entitled Beckham: For The Love Of The Game, which aims to show the global appeal of the Beautiful Game.

On how the programme came about, Beckham had earlier said: "I remember sitting on a plane and discussing this idea with friends and never thinking it would become a reality.

"Whether as a player or out in the field for Unicef and other charitable partners, I have seen the transformational effect that sport and, in particular football, has on people's lives.

"This epic journey will allow me to show the positive side of the game I love and shine a light on the passion and selflessness of people that play this sport as a force for good."

This article was first published on November 6, 2015.
Get The New Paper for more stories.