Fix crumbling EU before it's too late 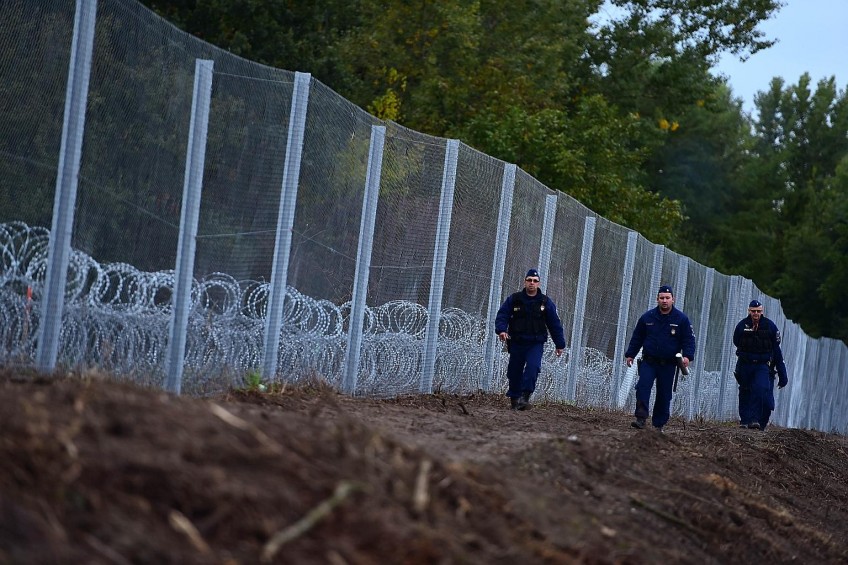 Police officers patrolling a newly erected fence at the Hungarian- Croatian border near Zakany. As governments erect barriers and reinstate border controls, the refugee crisis is disrupting flows of people and gumming up trade.
AFP

LONDON - If a clear signal is needed that the European Union is falling apart at an alarming rate, Hungary's construction of razor-wire fences along the border with its fellow EU member, Croatia, is it. The crisis in the euro zone has, of course, fragmented financial flows, caused economies to diverge, eroded political support for EU institutions and set Europeans against one another.

Now, as governments erect barriers and reinstate border controls, the refugee crisis is disrupting flows of people and gumming up trade. And, as the EU unravels, the risk of Britain voting to leave is rising.

It is often argued that the EU progresses through crises, because they focus minds on the overwhelming need for further integration. But this requires at least four ingredients: a correct shared understanding of the problem, agreement on an effective way forward, willingness to pool more sovereignty, and political leaders able to drive change forward. All four are now lacking.

EU leaders are weak, divided and seemingly incapable of setting out a credible vision of the future benefits that European integration could provide, without which they cannot rally popular support and convince recalcitrant governments to bear their fair share of current costs.

The euro zone and refugee crises have common features that make them tricky to resolve. Both involve disputes about sharing costs, complicated by a clash of values, at the centre of which lies a newly dominant Germany.

The EU is hopeless at burden sharing. Rather than agree on a fair division of costs, whether of the financial crisis or of welcoming refugees, governments try to minimise their obligations and shift them onto others - thereby increasing the collective costs. A banking crisis that could have been resolved through a fair and decisive restructuring of unsustainable debts has ballooned into a much greater economic and political crisis that pits creditors against debtors, both within and among countries.

Likewise, EU rules stipulating that refugees should be granted asylum in the first member country they reach have proved both unworkable and unfair, because asylum-seekers mostly arrive in southern Europe and want to head north, and Greece and Italy ignore the rules and facilitate their passage. Transit countries, such as Hungary, try to divert refugees elsewhere. Resettling the almost 750,000 people who have sought asylum in the EU this year - still only 0.14 per cent of the EU population - has thus become an existential crisis.

Part of the problem is blinkered decision-making. EU leaders focus narrowly on limiting short-term financial and political costs, rather than thinking strategically about longer-term consequences.

Until recently, German policymakers sought to atone for the country's Nazi past by seeking a more European Germany and bankrolling the EU, thus helping to smooth over many disputes. But, with Germany's position as creditor-in-chief having thrust it into the driver's seat, Chancellor Angela Merkel's administration now seeks to create a more Germanic Europe.

Germany refuses to accept that its beggar-thy-neighbour economic policies - reflected in its massive current-account surpluses - are both a cause of the euro zone crisis and a major impediment to resolving it. Instead, it bullies others to get its way, wrongly identifying its narrow interests as a creditor with those of the system as a whole.

Dr Merkel has played a much more positive role in the refugee crisis. Germany unilaterally suspended application of the EU's asylum rules and pledged to accept all arriving Syrian refugees. But Dr Merkel's failure to offer those refugees safe passage has exacerbated the chaos. Subsequently, reimposing border controls within the supposedly border-free Schengen Area set a terrible precedent, prompting Germany's neighbours to do likewise.

Meanwhile, with the EU increasingly viewed as a source of economic crisis, political turmoil and unwanted migrants, the risk that Britons will vote to leave in a referendum due before the end of 2017 is rising. Britain is already semi-detached - outside of Schengen and with opt-outs from the euro and many home-affairs matters (including asylum policy). With the government now seeking to negotiate even looser membership terms, Britain will end up more estranged from the EU even if it remains a member.

Polls are finely balanced and referendums unpredictable. At a time of anti-establishment rage and political upheaval, anti-EU campaigners can peddle three fantasies of a post-EU future: a free-market, foreigner-free or socialist Utopia. The pro-EU camp, by contrast, has to sell the reality of the EU as it is, warts and all.

Until recently, EU integration seemed inevitable. It might stall, but it would never go into reverse. Countries joined; none left. But with the EU already crumbling, Brexit could turn that dynamic on its head. That is all the more reason to fix the EU before it is too late.

The writer, a former economic adviser to the president of the European Commission, is a visiting senior fellow at the London School of Economics' European Institute.

This article was first published on Oct 23, 2015.
Get a copy of The Straits Times or go to straitstimes.com for more stories.