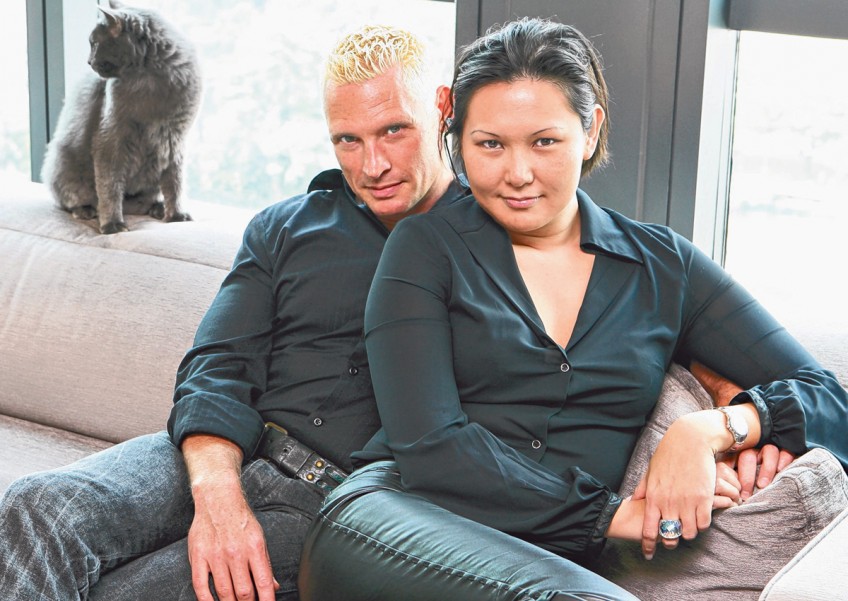 The restaurant business can leave those involved with a sour taste.

Celebrity chef Emmanuel Stroobant, his wife Edina Hong, and Ms Monique Kwok, the co-partner of seafood restaurant Crab in Da Bag, are locked in a legal tussle over claims, remuneration and other payments.

A civil suit for over $1.7 million was first filed in the High Court late last year.

Ms Kwok, the plaintiff in this suit, said she was asked to help out in the Stroobants' restaurant business on the basis of her experience.

According to the statement of claim, Ms Kwok had worked in the food and beverage industry and "had thorough hands-on experience in the operations and overall management of very successful businesses in Kuala Lumpur, Malaysia, for about nine years".

After relocating in 2005, Ms Kwok was first employed in the Stroobants' other restaurant, Saint Pierre.

It was in late 2006 when Madam Hong allegedly proposed that the trio start Brussels Sprouts.

Ms Kwok was appointed director of the first restaurant in February 2007.

She became director of two other Brussels Sprouts restaurants, in 2010 and 2012. The statement of claim also said that Ms Kwok holds 49 per cent of the paid-up capital of all three restaurants.

Madam Hong, in her counter claim, said she hired her former schoolmate out of pity.

The Stroobants said Ms Kwok had wanted to relocate to Singapore due to a falling out between her sister and her then-husband.

Madam Hong alleged that Ms Kwok contacted her after not being able to find a job and "by reason of their friendship", she arranged for Ms Kwok to be employed at Saint Pierre.

She also arranged a job for Ms Kwok's then-husband as an IT consultant. Ms Kwok has since divorced him.

She is taking celebrity chef Emmanuel Stroobant and his wife Edina Hong to court for over $1.7 million covering the loss of dividends, income and reimbursement of expenses incurred from July last year.

Former director of Brussels Sprouts Monique Kwok believes she was wrongly terminated after her relationship with Madam Hong soured.

According to her, Madam Hong proposed that the three of them start Brussels Sprouts, a restaurant styled after Ms Kwok's personality and to be managed by Ms Kwok.

The success of the first restaurant led to the opening of two more outlets, said Ms Kwok.

But things came to a head when Madam Hong allegedly interfered with the running of the restaurants, even hiring a chief executive officer with no hands-on experience and with a salary to be carved out of Ms Kwok's.

Madam Hong and the new CEO "proceeded to conduct a deliberate campaign to marginalise her from the business operations" by realigning staff salaries, designations and responsibilities, and changing cheque signatories without informing Ms Kwok.

Ms Kwok claimed that a month after the CEO joined, she received a WhatsApp message informing her of her removal as a director.

They claimed she breached her "employment and directorship duties" when she was appointed director and shareholder of another restaurant, Crab in Da Bag, in June 2013 and July 2014 while still under their employment.

They said she did not disclose the new appointments and allegedly devoted her time there when she was supposed to be looking after their three Brussels Sprouts restaurants.

They also claimed she diverted resources belonging to Brussels Sprouts to Crab in Da Bag and allowed the copying of menu designs.

The Stroobants also accuse Ms Kwok of making unauthorised and unsupported reimbursements and over-claims from their restaurants amounting to $140,259.

The Stroobants said they hired her out of childhood ties and pity, wanting to help ease tensions between Ms Kwok's sister and her then-husband.

The idea of setting up Brussels Sprouts and the restaurant's concept had nothing to do with Ms Kwok, they say.

The Stroobants also claim that Madam Hong was not interfering, but forced to step in due to Ms Kwok's "inexperience and inefficiencies".

These included allegedly allowing staff to forge her signature and abuse meal allowances, as well as being absent from work often.

In 2006, Fish & Co sued former operations manager Dickson Low, who was then running the MFM chain in Malaysia, alleging that he had taken its secret recipes, cooking tips and kitchen operations.

They reached an undisclosed out-of-court settlement, but a new suit was filed five months later by Fish & Co when sales continued to fall. The High Court awarded Fish & Co $269,000 in damages in 2009.

The High Court found no real evidence that the public would likely confuse the two.

The first Subway Niche stall, selling local snacks, was set up in Wisma Atria in 1987 - two years before Subway registered its trademarks in Singapore.

This article was first published on August 26, 2015.
Get The New Paper for more stories.