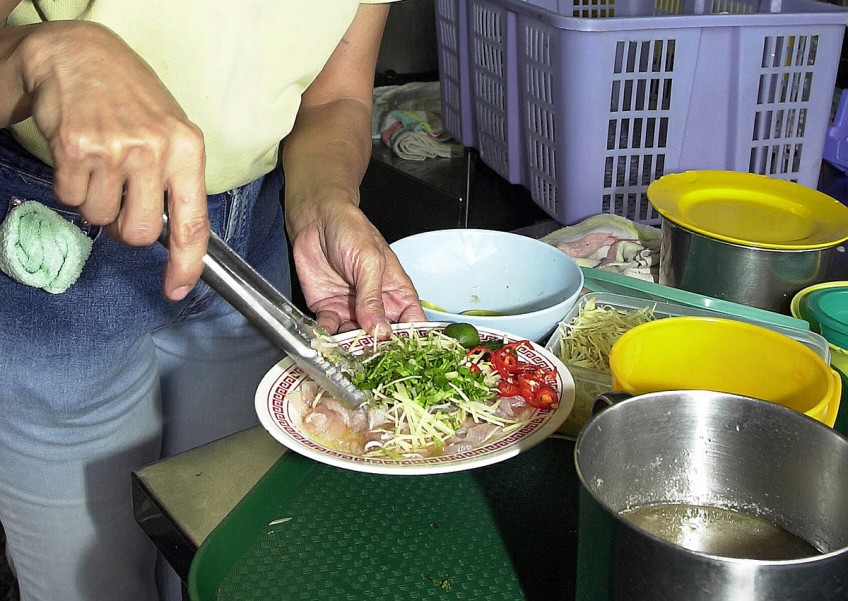 Rather than take the risk of being held responsible for any casualties, food operators The Straits Times spoke to said they will take all Chinese-style raw fish dishes off the menu, and comply with any restrictions imposed by the National Environment Agency (NEA).

Mr Lim Meng Seng, who runs a porridge stall in Old Airport Road, has stopped selling raw fish porridge since July when the NEA issued an advisory against using song fish and toman fish - also known as the Asian bighead catfish and snakehead respectively - in dishes.

"We are not sure which suppliers adopt the correct cold chain management and handling practices so, to be safe, I will stop selling raw fish dishes completely," Mr Lim said. "I only sold about 20 to 50 dishes of yusheng porridge a day so it's not worth the risk."

Yesterday, the NEA held a briefing for operators of establishments that sell such Chinese-style raw fish dishes.

It advised them to stop the sale of all types of Chinese-style raw fish dishes, unless the fish come from suppliers that adopt proper cold chain management and hygienic handling practices.

These include transporting fish at temperatures lower than 5 deg C.

Fish meant to be eaten raw should also be packed in a hygienic environment and kept separate from raw fish meant for cooking, so as to avoid cross-contamination.

Fish at wet markets tend not to be separated in such a manner.

Salesman Sim Tharn Chun, 52, was hospitalised on Thursday last week after eating a raw fish dish at Tiong Bahru hawker centre. He was admitted to Khoo Teck Puat Hospital and remains in critical condition. The incident has put the safety of raw fish dishes back in the spotlight.

A Ministry of Health investigation into the spike in the number of Group B Streptococcus (GBS) infections earlier this year found a link between the consumption of Chinese-style raw fish dishes and the disease.

GBS are a common type of bacteria found in the gut or urinary tract of about 15 per cent to 30 per cent of adults, and do not usually cause disease in healthy people. But they may occasionally cause serious infections of the joints, brain, heart and blood.

Owners of food outlets which breach these regulations risk having enforcement action taken against them, which can range from fines of a few hundred dollars to revocation of their licences for repeated offences.

"I considered using alternative types of fish and customers keep pressing me to start reselling my raw fish dishes," she said. "I'm disappointed we can't sell these dishes any more... But we have no choice... as we have to put customers' safety first."

Most hawkers buy the fish for yusheng (raw fish) dishes at wet markets.

"Most fish sold at Singapore's general markets and fishery ports are intended for cooking, and should not be eaten raw," the NEA, Health Ministry, and Agri-Food and Veterinary Authority said in a statement yesterday.

Instead, the NEA has advised food stalls to purchase fish from suppliers able to prove the quality of the fish by providing a health certificate from the relevant authority of the country of origin. They added that, depending on the quality of the water that these fish were bred in or harvested from, they could be carriers of parasites or bacteria.

Raw fish meant for consumption "are typically bred in or harvested from cleaner waters", the statement said.

What the experts say about the bacteria

Q: What are Group B Streptococcus (GBS) bacteria?

A: They are commonly found in the gut and urinary tract in about 15 to 30 per cent of adults without causing any disease.

But they may occasionally cause infections of the skin, joints, heart and brain. Those who have chronic conditions such as diabetes usually have a higher risk of getting a GBS infection.

Q: The GBS ST283 strain has been associated with consuming yusheng, a raw fish dish, but not sashimi so far. Why?

A: The reason is still not known but one reason could be that the song, toman and tilapia fish are freshwater fish, whereas most sashimi fish are seawater fish, said senior research scientist Swaine Chen from the Agency for Science, Technology and Research's Genome Institute of Singapore.

Experts have also pointed to cross-contamination as a possible cause.

Q: What makes sashimi safe to eat, but not yusheng raw fish dishes?

A: Most fish used in Chinese-style raw fish dishes are intended for cooking, and should not be eaten raw.

Fish that are supposed to be eaten raw, such as that for sashimi, are typically bred or harvested from cleaner waters, as well as stored and distributed according to specific cold chain management practices.

This includes transporting them at temperatures below 5 deg C, and packing them independently in a clean and hygienic environment.

A: While the ST283 strain has not been looked at in other types of animals, Dr Chen said that the risk from other meats for this particular strain is "very, very low".

Q: Will GBS bacteria spread from human to human?

A: The bacteria can be transmitted from an infected pregnant woman to her baby during delivery, which can be life-threatening for the baby, said Associate Professor Kevin Pethe, from Nanyang Technological University's Lee Kong Chian School of Medicine.

However, for this strain in particular, the spread from human to human has not happened.

So far, it appears to have spread to humans only via food consumption, said Dr Hsu Li Yang, a consultant in the Division of Infectious Diseases at the National University Hospital.

Q: How does the bacteria enter the body?

A: The bacteria enter the body through the gut before they go into the blood stream, and cause an infection in the brain, joints or bones, said Dr Leong Hoe Nam, an infectious diseases specialist from Mount Elizabeth Novena Hospital.

Q: Why does the GBS strain not affect everyone in the same way?

A: In general, people who have weak immune systems or other medical problems have a higher risk of many infections.

Q: Were poor hygiene practices of hawkers behind the GBS outbreak earlier this year?

A: It is unlikely. The stool samples of 82 food handlers and fishmongers were tested, and none of them was positive for the specific strain of GBS associated with the outbreak.

Q: If the bacteria did not come from mishandling by hawkers, where did they originate from?

A: There is not enough data to be sure. However, the possibility of them being imported bacteria from fish farms or suppliers overseas cannot be ruled out.

Q: Does this mean that hawkers will no longer be allowed to sell Chinese-style raw fish dishes with porridge in the future?

A: No. They will be allowed to sell such dishes as long as they are able to show that their fish come from suppliers with a health certificate attesting to their quality.

They must also adhere to all other practices required to sell such fish, such as handling this kind of raw fish separately from other raw products that are going to be cooked.

Timeline of the GBS outbreak

A text message claiming that a man has died from a Group B Streptococcus (GBS) infection after eating contaminated sashimi goes viral. The Health Ministry (MOH) says hospitals have alerted it to a rise in the number of such infections, and that it is investigating.

Hawkers are advised to temporarily stop selling dishes containing two types of raw fish - song (Asian bighead carp) and toman (snakehead). MOH says it has found a link between eating such raw fish and GBS infections in a "limited number" of cases, but more investigations have to be done before a definite conclusion is reached.

MOH says its investigations have not found any links between GBS infections and the consumption of Japanese raw meat or fish sashimi.

It also says there has been a "significant downtrend" in the number of GBS cases since hawkers were advised to stop selling the Chinese- style raw fish dishes. There are fewer than five cases each week now.

On the same day, technician Tan Whee Boon, 50, whose limbs turned black and gangrenous after emergency treatment for a GBS infection, has his feet amputated. His hands were amputated about a week before.

Salesman Sim Tharn Chun, 52, is reported to be in critical condition at Khoo Teck Puat Hospital after a GBS infection. He had contracted meningitis, an infection of the membranes surrounding the brain and spinal cord.

MOH says there is a definite link between the consumption of Chinese-style raw fish dishes and GBS infections. Hawkers are told to stop selling them, unless they can prove the fish comes from safe suppliers.

MOH says that among all the GBS cases this year, two have died. One death is still under investigation while the other was not linked to the outbreak.

This article was first published on November 28, 2015.
Get a copy of The Straits Times or go to straitstimes.com for more stories.