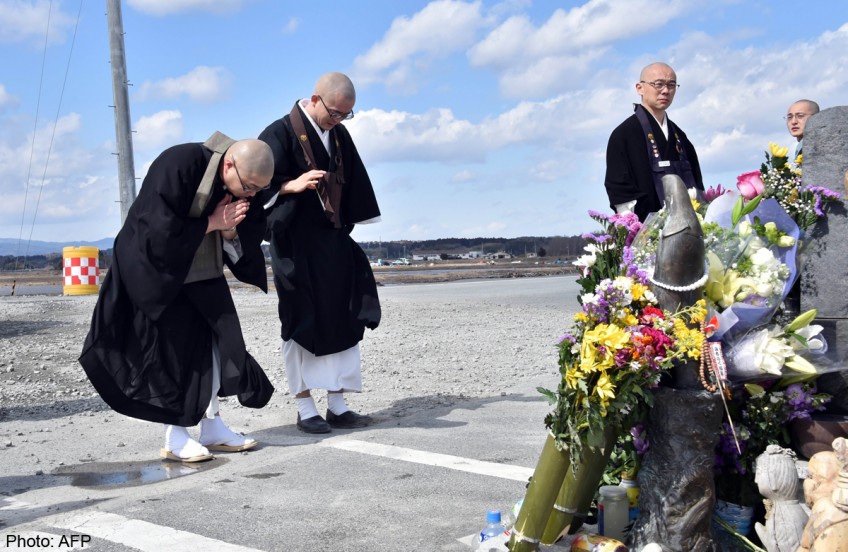 Buddhist monks offer prayers at the altar at Namie, near the striken TEPCO's Fukushima Dai-ichi nuclear plant in Fukushima prefecture on March 11, 2015 on the fourth anniversary day of massive earthquake and tsunami hit northern Japan.

TAIPEI, Taiwan - More than 283 Japanese food products imported from the radiation-stricken areas near the Fukushima Dai-ichi nuclear disaster were found to be relabeled as having come from other areas of Japan and sold to local customers, authorities said yesterday.

Officials from New Taipei City's Department of Health, as well as the Food and Drug Administration and other law-enforcement authorities, seized the mislabeled products, although a substantial portion had already been sold to consumers.

Nineteen products originated from areas exposed to radiation and five other products have expired, the department said.

Officials have discovered a total of 2,391 kilograms of problematic products and will continue to investigate.

Food and Drug Administration chief Chiang Yu-mei pointed out there has been a rise in reports of products from the five areas that were affected by the Fukushima crisis. The administration and police investigated areas including Hsinchu County, Taichung City, Tainan City and Kaohsiung City from March 19 to 21.

Investigators found around 3,000 products with mislabeled origins at the Port of Keelung. More than 300 products were reported to have been imported from the five prefectures exposed to radiation.

The investigations have proven to be difficult because Japanese and Taiwanese companies have different management practices, Chiang said. The administration has resolved to crack down on the 10 companies involved with the mislabeled products.

The Health Department has also said the companies will take responsibility and full refunds will be provided for consumers with products and receipts for purchases made on or after March 11, 2011.

Products found in violation of the law have been pulled from the shelves. The import companies have also been ordered to inform downstream sellers to cease the sale of all the said products within a week.