6 eateries in KL ordered to clean up act 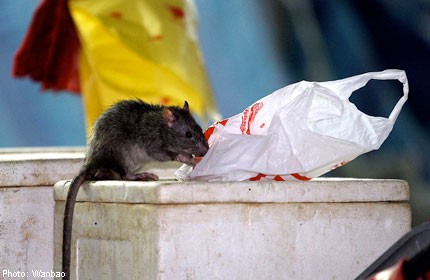 MALAYSIA - Six restaurants along Jalan Ipoh, Kuala Lumpur, were shut down for 14 days due to lack of hygiene.

In an operation dubbed Ops Dapur in Jalan Ipoh (from Batu 1 to Batu 5), about 50 officers from the Federal Territories of Kuala Lumpur and Putrajaya Health Department (JKWPKL) and Kuala Lumpur City Hall (DBKL) inspected 29 premises.

"Raw materials were placed next to cooked food, the presence of rats and cockroaches, workers who had not been immunised against typhoid, uncovered trash bins and a lack of personal hygiene among food handlers," Dr Balachandran said.

"If any of the premises scores less than 65 per cent, we immediately issue a compound to the owners to shut down for two weeks.

"Errant operators will have to thoroughly clean the premises before being allowed to resume business," he said, adding that the lowest grade given during the operation was 25 per cent.

Under the Food Hygiene Regulations 2009, owners can also be fined between RM100 and RM1,000 if found to have failed to follow instructions to improve the cleanliness of their premises.

"We will be fully enforcing the Food Hygiene Regulations 2009 next year.

"For now, the Health Department is carrying out educational enforcement to raise awareness on the regulations and requirements among food operators," Dr Balachandran said.

Since January, JKWPKL has inspected 1,236 food premises, of which 111 were ordered to close.