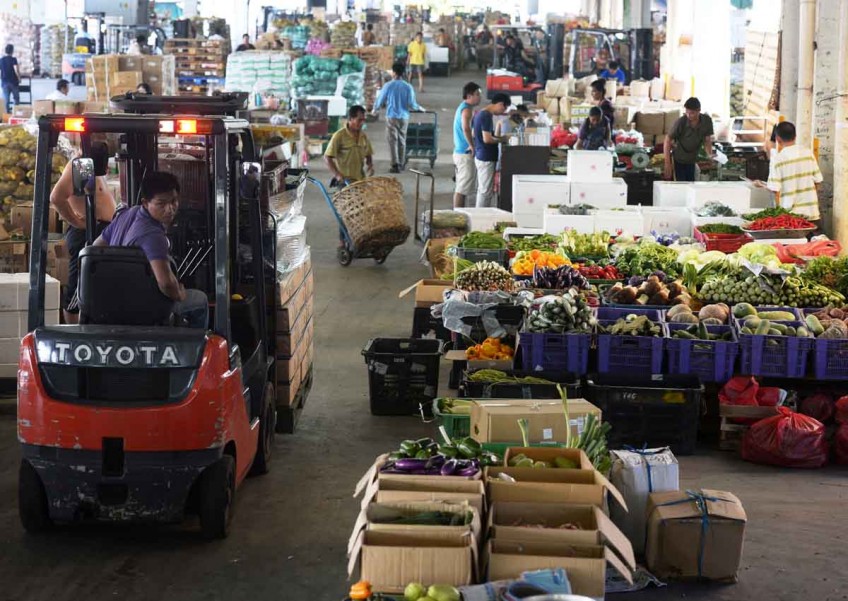 SINGAPORE - Chinese New Year is just around the corner, which means families celebrating the festival are stocking up on groceries and goodies for the occasion.

But with a gloomy economic outlook for 2017, Singaporeans are also tightening their belts, as a recent survey found.

Here are some places where smart shoppers can stock up on a budget.

Supermarket chain FairPrice has a members-only mega retail store where consumers can buy items in bulk at discounts of up to 20 per cent.

Warehouse Club, the two-storey store at the FairPrice Hub in Joo Koon, stocks more than 4,000 products, including groceries, fresh and frozen food, electronics, household goods and health and beauty products.

Here are other places where products can be bought in bulk at lower prices.

Opened in 1983 to centralise the distribution of fruit, vegetables and dried goods, the wholesale centre attracts both retailers and consumers alike. The 26-block complex which is about 20 football fields in size, houses some 1,405 stalls, shops, offices and cold rooms. The site has its own canteen and an auction hall where hundreds of wet market vendors and restaurant owners bid for the freshest groceries in the wee hours.

Where: 1 Wholesale Centre. It is located off West Coast Highway, opposite Haw Par Villa.

When: It is open 24 hours, but business is most brisk between midnight and 6am.

Frozen items include snapper loin ($32 a kg) and scallop (from $44 a kg). Prices may fluctuate and are subject to change.

For at least 30 years, this open-air market has been selling vegetables from Malaysia in bulk. The makeshift market, which starts from about 11pm and runs until day break, extends for about 120m along Toa Payoh East, outside Pei Chun Public School, after the junction of Lorong 7 Toa Payoh.

Most vegetables are either presented in boxes, baskets, or on ground sheets or directly on the road.

It is mostly frequented by food stall and wet market stall owners, but many members of the public also buy vegetables here. While many items are sold in bulk - think kilograms of leafy vegetables - most stall owners are also willing to accommodate home cooks' requests for smaller quantities.

Expect everything from jicama and wintermelons, to Vietnamese mint and pandan leaves. Depending what is fresh and in season, items can also include wing beans, snake beans, shimeji mushrooms and eggplants in different shapes and sizes.

Prices are significantly cheaper than in supermarkets, and about 20 per cent cheaper than at wet markets, depending on the type of vegetable. For instance, a packet of shimeiji mushrooms at one stall costs 90 cents, while a similar packet at a leading supermarket can cost between $1.60 and $3.

When: The market, which has about 10 stalls, is open six days a week from about 11pm to about 6.30am. It is closed on Sundays.

This is the go-to wholesale centre for Chinese New Year delicacies. Items on sale here include everything from dried shrimp and dried sea cucumber, to canned and dried abalone. There is also fried fish maw, duck web, lup cheong, red dates, dried plums and more.

There are about 15 stalls on the ground floor that sell these delicacies, so you can pick and choose items from various shops. Some shops also sell basic provisions such as onions and ginger, as well as takeaway containers and plastic bags.

Expect prices to fluctuate in the leadup to Chinese New Year. As a gauge, prices start from $2 and upwards for 1kg of dried shrimp, to $28 for a 500g packet of frozen shark's fin. A can of abalone starts at $26.80. While most items are pre-packed, some ingredients such as dried flower mushrooms, dried scallop and spiky sea cucumber, are also sold loose. They can be bought in desired amounts and are priced by weight.

When: Most shops open from 9am and close by 6pm (Mondays to Saturdays). Closed on Sundays.

Info: Go to for the full list of retailers http://victoriawholesalecentre.com/

This wholesaler sells a range of premium seafood and meats.

For Chinese New Year, it will have a pop-up sale offering items such as ang kar prawns, sea cucumber, wagyu beef and pomfret. The products are imported from countries such as Australia, Japan and the United States.

This article was first published on Dec 12, 2014.
Get a copy of The Straits Times or go to straitstimes.com for more stories.