AsiaOne explains: What do the different beer terms mean?

W.T.M. Why This Matters
[This article has been updated]. What's the difference between stout, lager, craft beer and ciders? Here's a simple guide to those who are not familiar with the different beer terms used frequently.

You may have heard the term 'craft beer' before, but what is it exactly?

Craft beers are more commonly found in smaller shops (not coffeeshops) dedicated to selling different types and brands of beer.

The main idea behind craft beer is that it is made in smaller quantities with better ingredients.

Varieties of craft beers are much more diverse with each independent brewery specialising in their own specific brew. As a result, craft beers are usually more tasty compared to traditional draught beers we are familiar with but are also more expensive (and rare).

For the non-beer connoisseurs, here are some other beer terms you may have heard of before, without realising what they mean.

Beers are broadly split into two categories - ale and lager. These two types are differentiated by the yeast used to make the beer.

For ale, the beer is brewed at a higher temperature such that the yeast acts quickly, which means that some ales may finish fermenting within just two weeks.

Lager is brewed at lower temperatures resulting in a slower fermentation process, which is interesting because lager in German means "to store".

In terms of taste and flavours, lagers generally have a lighter, crisper taste to the point of almost tasting carbonated. The beer goes down smooth and mellow, and is a lighter-bodied drink in general.

Unlike bottled or canned beer, draught beer is served directly from a tap that are often connected to kegs.

Draught beer is cheaper compared to craft beer and is produced in large quantities in breweries. A comparison in taste between the two is that draught beer tastes fresher compared to bottled beer. This is on account of its shorter shelf life of about two days.

Stout is a form of full-bodied ale that has plenty of roasted malts, giving it a much darker, almost bitter, chocolate flavour.

Stout also comes in a darker colour, which makes sense since beer derives its colour from the degree of roasting of its malt. An interesting combination that is getting popular is the mixing of stout and pale ale, called a black and tan resulting in a drink that is smooth yet not too strong.

Try it the next time you go to a bar or Beerfest Asia that is happening from August 17 to 20. 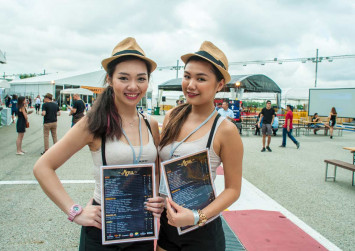 While cider and beer are both prepared via fermentation, cider is made via the fermentation of apple juice. This means that there are no malted grains in any ciders, which explains why cider does not contain the same bitter maltiness found in all beers.

Ciders are lighter and more yellow in appearance as compared to beer in general, but some ciders come in darker brown colours too.

Ciders are also made from a variety of flavours such as pear, blackcurrent and even elderflower.

While at Beerfest Asia, try these

We had the chance to taste a range of beers that were paired with food, all of which will be featured at Beerfest Asia 2017 held at the Marina Bay Cruise Centre from Aug 17 to 20.

The two outstanding choices among the group were Citra Sea Mead by Gosnell and Stark Lychee Ale by The Asian Collection. If you prefer a sweeter palate, the Citra Sea Mead is the one. It has a welcoming light honey aroma with a sweet but not overwhelming taste. This beer is made with honey, lemon peel and tarragon. It's almost like a cocktail. Originally brewed for Beerfest Asia 2016, this is likely the only mead in the world with seawater - from Cornwall as this originates in the UK. It paired well with the pork schnitzel by Platform 1904. In keeping with the sweet theme, the Stark Lychee Ale paired with Creamier's raspberry and rose ice cream made a unique and interesting craft float. It was so good I had two. Stark is a craft beer made in Bali, and is fragrant but not overly sweet, making it the perfect pairing with Creamier. Another enjoyable beer was the Meantime London Pale Ale by 6 Drunk Men from the UK. It has a citrus aroma and its bitterness made it refreshing that was enhanced by the beautiful pairing of salted egg yolk crisps and fish skin by The Golden Duck.

That pairing also went well with Lamzing Sticky Mango by Beer Connoisseur from Thailand which is an easy-to-drink pale ale. It smells sweet with a slight fruity hint of mango and mild coconut. An excellent meal to have at Beerfest is Beirut Grill's hummus and chicken shawarma roll. It paired nicely with Spain's Estrella Galicia Especial by Iconic Wines as the meal rounded off the lager's mild and warm taste. Local brew Tiger White by Asia Pacific Breweries smells great with its citrusy flavour made of orange, coriander and clove. The barbeque pork ribs by The Handle Bar were so tender and paired well with this wheat beer. Germany's Benediktiner Dunkel by Yen Investment was fruity smelling and tasting even though it contains no fruit. It's a full-intensity dark wheat beer that's dry, fresh, and softly-sparkling, which probably explains the fruity hints as its clear lively character contrasts with the intense, malty sweetness. The cheese burger by Kontiki - where the tasting was held - made a good pairing.

An unexpected addition to the tasting was the new Ah Kah Ji craft beer by Archipelago Brewery Singapore. It's very light, clean tasting, and features local tap water as one of its ingredients. At the time of tasting, this beer was not available to public yet but will be available at Beerfest.

Tickets for Beerfest Asia 2017 are on sale and can be purchased here. Each ticket includes one complimentary welcome beer to be redeemed on festival grounds. VIP packages are available that include free flow beer, access to VIP-only areas, express entry at festival gates, and complimentary VIP Kit including a festival shirt.

WIN VIP TICKETS TO BEERFEST ASIA 2017!
To win VIP tickets to Saturday's (Aug 19) Beerfest Asia, just LIKE AsiaOne's Facebook page, SHARE this article on your own Facebook page, and ANSWER these 3 questions in the comments section on Facebook.
1. What is craft beer? (Hint, the answer is within the first 4 lines of this article) 2. Name one beer we tasted that will be featured at Beerfest Asia 3. When is Beerfest Asia?
Contest ends on Monday, Aug 14 at 10am. Get sharing!
#Beerfest Asia #BEER #Party Girl