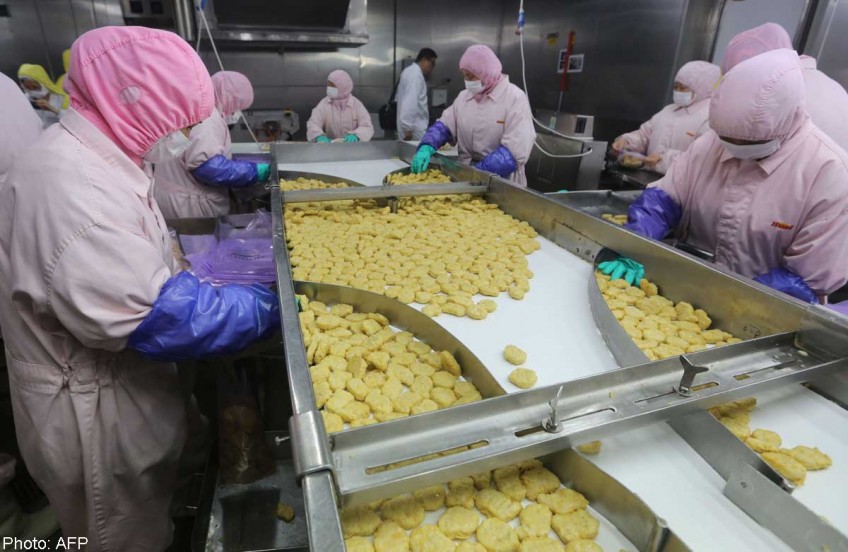 This picture taken on July 20, 2014 shows workers producing food at the Shanghai Husi Food Co., a factory of US food provider OSI Group, in Shanghai.

The China Food and Drug Administration said on Monday night that it had asked authorities across the country to check companies that use products from Shanghai Husi Food Co.

Shanghai has sealed about 100 metric tons of products made by the company, including fried chicken, steak, hamburger and pork, the city government said on Tuesday. The products have gone to nine companies including McDonald's, Pizza Hut, Burger King, Papa John's and Dicos.

Zhang Jian, an inspection official with the food and drug administration of Nanjing, Jiangsu province, said Pizza Hut and McDonald's in the city used products supplied by Shanghai Husi Food, and the local McDonald's stores have taken 18 kinds of products off the shelf and sealed them. The products ranged from hamburger, chicken and pork to tomato, lettuce, cucumber and onion.

An official in the Food and Drug Administration of Hefei, Anhui province, who declined to be identified, said that by 10 pm on Monday more than 1,070 bags of steak had been sealed in 13 Pizza Hut restaurants and 378 boxes of products, including meat and vegetables, had been sealed in 15 McDonald's outlets.

Guangdong province said on Tuesday that the Guangzhou logistics centre of Yum! Brands - which owns KFC and Pizza Hut - has sealed more than 13,000 kilograms of processed meat.

The China Food and Drug Administration asked local authorities to do an "immediate and overall" inspection on Shanghai Husi Food's sister companies in China. Husi is owned by US-based OSI Group.

The group said on its website that it has set up companies to produce or process meat and vegetables in Hebei, Henan, Shandong, Yunnan, Guangdong and Fujian provinces.

Inspectors have tested all products kept in storage by two food companies owned by OSI in Weihai, Shandong province, and no violations were found, the Food and Drug Administration of Shandong said.

Wang Hongyi in Shanghai, Zhao Ruixue in Jinan and Zhang Yu in Shijiazhuang contributed to this story.