Beauty on a plate 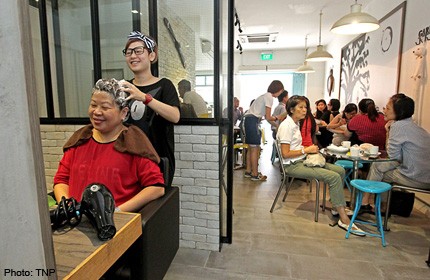 She came up with the idea of integrating a cafe serving local delights into the salon so that her patrons could grab a bite while doing their hair.

Some of these services, like hair treatments, can last a few hours, she said.

But now, the cafe is what's generating the buzz instead.

This was also Madam May Tong's way of playing safe - this was her first time running a business after caring for her three children for the past decade.

Madam Tong, who set up Take 2 Cafe Take 2 Saloon at Thomson Road three months ago, said: "If the response for one side is not good, at least we can maintain the other one. Not the whole thing will be gone."

The salon first opened in July, followed by the cafe the next month.

Initially, she had intended for the cafe to cater to just her patrons.

But when she saw how well people were taking to her local delights that the cafe serves, she decided to open it to the public.

"We decided to serve local food because you can have coffee and cake everywhere these days.

"The customers seem to like the personal touch that comes with the home-cooked food we serve," she said.

Two months after her foray into the market, Madam Tong is relieved that her business venture is doing better than expected.

"At first, I had no confidence that this would work out. But at least the response is not bad."

Madam Tong said that the cafe is doing better than the salon, but that is within her expectations.

"The salon is picking up a bit slowly because it's not so easy for someone to change (from) a hairstylist he or she is familiar with," Madam Tong said.