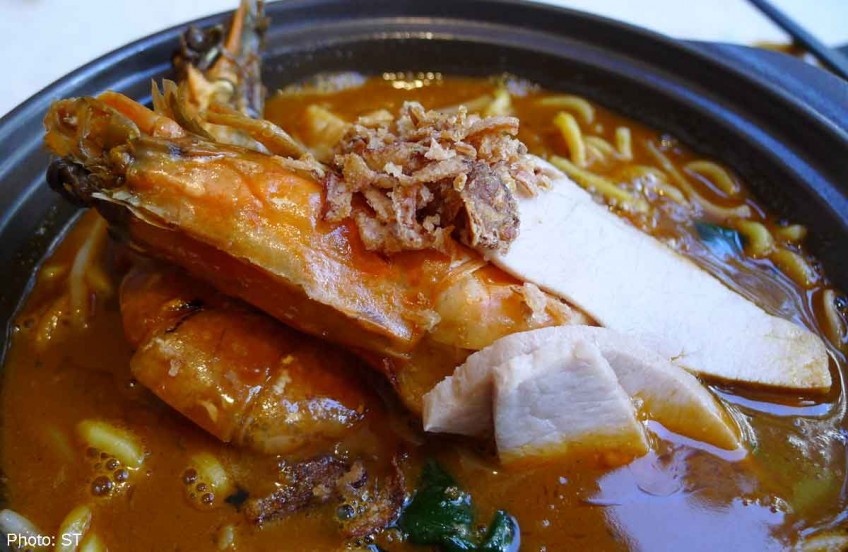 It was lunchtime last Saturday and Orchard Road thronged with shoppers. It was the last weekend before Christmas after all.

But there I was with a friend at Kuvo, a month-old restaurant in Orchard Shopping Centre, and we were the only customers.

Orchard Shopping Centre is next to 313@Somerset, smack in the middle of the shopping belt. Foodies not familiar with the name of the building will know that Lei Garden used to have a restaurant on the third floor.

Kuvo is an ambitious multi-concept project that occupies the entire second floor. It is opened by Sarika Connoisseur Cafe, the company behind the TCC cafe chain, and comprises a wine lounge, an all-day restaurant, a gift shop and a cocktail bar.

The restaurant, called Ambrosia to distinguish it from the other spaces, is an expansive 88-seater separated into two areas by the escalator and lift landings in the middle. So you can imagine how surreal it felt to be the only two diners there.

The menu, too, was eclectic in a rather weird way. There were all-day breakfasts of pancakes and omelettes, while the main offerings consisted of dishes such as duck confit and rack of lamb, leading me to conclude that this was another mid-priced Western restaurant.

Then I turned the page and there were also three Asian dishes listed: prawn noodle soup, laksa lemak and nasi goreng, which completely threw me off.

But this best-kept food secret in Orchard Road was definitely worth discovering - because the food was good.

The Kuvo Coffee Hot Wings ($14) were some of the best chicken wings I've eaten. They were coated in a sticky sweet, sour and spicy sauce with just a hint of coffee to make the flavours even more interesting. And the wings were very crisp on the outside, but moist and smooth inside. They were huge too, so that you got chunks of meat with every bite.

The Crisp Iberico Pork Belly ($26) lived up to its name with a very crispy crackling. However, it would be even better if the cut was fatter. As it was, the meat was tender but without enough fat to moisten it, it lacked the melt-in-the-mouth texture that makes pork belly such a guilty pleasure.

Another dish I ordered, Calamari Al Ajillo ($22), was an alternative to the more common Spanish tapas of gambas al ajillo, which was also available at Kuvo as Tiger Prawns Al Ajillo ($26). But the squid was a tad tough and did not quite take on the flavours of the garlic, chorizo and olive oil it was cooked with. The prawns would probably be a better choice.

The Duck Classique ($36), duck leg confit served with oven-roasted cheese-potato cake and Amaretto prune jus, was more than competent. The skin was crisp and the meat fork-tender. And the cake was delicious.

But it was the King Prawn Noodle Soup ($20) which completely floored me. It was the best version of the hawker dish I have eaten in an air-conditioned establishment, and better than many hawker stalls here. They are better versions among Penang hawkers though.

Still, this was an authentic Penang version of the dish, with a spicy broth that was thick and rich with the flavour of prawns. I felt it was a little too thick but that might not be a problem for many people because of how tasty it was. It was topped with two king prawns as well as slices of lean pork and fishcake. Crunch came from a generous amount of beansprouts, but the kangkong was overcooked and had gone soft.

The noodles came with the right chilli too - a smooth chilli paste served only with Penang prawn mee soup - instead of the cut red chillis you get from Singapore hawkers.

The Slipper Lobster Laksa Lemak ($22) was not what I expected at all. It was a cross between assam laksa and curry laksa. The rice noodles were topped with shredded vegetables as well as a slipper lobster but the sourish broth had coconut milk in it.

It tasted strange at first until I remembered that I had eaten a similar dish as a schoolboy in Kuala Lumpur at a classmate's home. His mother was a Penang Nonya, whose cooking had a lot of Thai influences and the laksa was an example of it.

It was a rare recipe and I was surprised to find it here, of all places.

Kuvo was full of surprises and most of them were good ones. Ironically, the fact that it was so quiet made the restaurant very appealing, as one watched the crowds on the street below while dining in relative serenity. But sadly, for me at least, that might not last - now that I have let the secret out.

This article was first published on December 28, 2014.
Get a copy of The Straits Times or go to straitstimes.com for more stories.