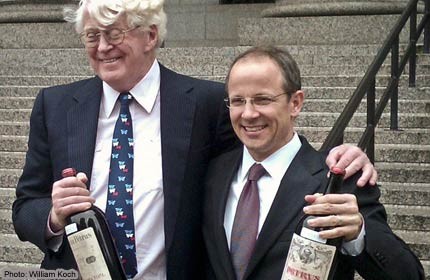 Koch was asking for US$4.2 million, plus punitive damages, for deceptive business practices and false advertising. The settlement terms were not disclosed, but a spokesman for Koch said the figure was "substantial."

"Acker is extremely pleased that its litigation with Mr. Koch has been settled and discontinued," the company said in a statement.

Koch's crusade, which began back in 2005 with suspicions about bottles of wine purported to have belonged to US President Thomas Jefferson, has led to several lawsuits against wine dealers and collectors.

"He does not like to be cheated," spokesman Brad Goldstein said.

Koch, 74, is the founder of Oxbow Energy group. He is the brother of conservative political activists, Charles and David Koch. Forbes estimates his net worth at $4 billion.

In a statement, Koch said he was shining a light on a "dark industry." As a result of the litigation, "consumers will now have more protection from unscrupulous collectors," he said.

Acker, Merrall & Condit, which also holds wine auctions, must now permit returns of suspect or counterfeit wines, the statement said. It will also authenticate all wine with vintages of 1969 or earlier.

A company representative was not immediately available for comment.

Koch has racked up several victories in court. Last year he won a fake-Bordeaux case against Silicon Valley entrepreneur Eric Greenberg, for which a judge also awarded more than $700,000 in punitive damages.

Koch also sued and testified against Rudy Kurniawan, a debonair Indonesian who was found guilty of fraud by a federal jury last December for selling counterfeit wines. Kurniawan is set to be sentenced next week.

In the 2005 case, Koch won against wine dealer Hardy Rodenstock, who sold him the counterfeit Jefferson bottles, according to the statement. Two men were even found to have engraved Jefferson's initials on the bottles.