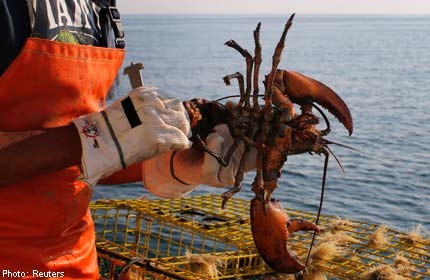 Lobsterman Steve Train checks a lobster while hauling traps in the waters off Cape Elizabeth, Maine.

PORTLAND - By all rights, lobsterman Steve Train should be the envy of commercial fishermen around the world.

Lobster populations in Maine are booming like never before. Tourists readily dole out US$15 (S$19.20) or more for lobster rolls, those delectable morsels of seafood on a bun. And environmentalists have praised the harvest as a rare example of sustainability in a sea of overfishing.

Enter market forces. Last year's record haul of 126 million pounds (57 million kg), double that of just a decade ago, led some to wonder whether lobster might go the way of cheap, everyday foods like the chicken nugget or TV dinner.

Prices paid to lobstermen at the dock plummeted and have not recovered. They are barely enough, says Train, to cover fuel and bait.

"It's hard to make a business plan the way things are going," said the 46-year-old lobsterman, who has fished the island-studded waters of Casco Bay since he was a teenager.

Even as many of the world's fisheries have floundered, the Maine lobster harvest, recently certified as sustainable by the nonprofit Marine Stewardship Council, has reached epic proportions, but success is relative.

"I'm sure the corn farmer, or the wheat farmer, or chicken farmers all felt the same way at some point," said Pete Daley, a manager at Garbo Lobster Co in Hancock, Maine, one of the country's largest distributors.

"People say, 'I'm not getting the price I used to get, or the price I deserve.' But what we're seeing here is an industry that's evolving."

No one knows exactly why lobster populations have increased so quickly.

The answer, says marine biologist Robert Steneck, is likely a combination of warming water temperatures, the overfishing of inshore predators like cod and a long history of forward-thinking conservation measures.

"This is a species that has been targeted (by fishermen) for 150 years or more and is doing better today than ever before," said Steneck, a professor at the University of Maine. "What other fishery on the planet can make that claim?"

In a recent sign of shifting ecosystems - and economics - two of the world's largest lobster distributors, Garbo and the Massachusetts-based East Coast Seafood, long known as fierce competitors, joined in a venture to convert the Stinson Seafood Plant in Prospect Harbor, Maine, the country's last sardine cannery, to a state-of-the-art lobster processing facility.

This year the plant, called Maine Fair Trade Lobster Co, will employ 130 people and process 5 million pounds (2.3 million kg). The number of lobster processing plants in the state has more than tripled, from 5 in 2010 to 16 last year.

"People are looking at this as a problem," said Michael Tourkistas, president of East Coast Seafoods, the country's largest lobster exporter.

"But if you're going to have an issue, excess supply is a good one to have."

The real problems, many observers contend, are those that have always plagued the industry: a mismatch of ecology and economics and a lack of cooperation among fishermen and dealers renowned for cutthroat competition.

In the spring and early summer, lobster come inshore to shed their rigid shells, making them easy prey for near-shore lobstermen in small boats - and easy to eat for tourists who arrive in Maine at about the same time.

The short-term bounty sets up a vicious cycle as the market quickly saturates and the state's 5,300 lobstermen fish ever harder to make up for low prices, further depressing the price.

"We all want to make the same paycheck. But if you had an industry that actually cooperated, you wouldn't be bringing in more product if you couldn't sell what you already had, right?" said John Jordan, a lobsterman and president of Calendar Islands Maine Lobster Co.

Jordan's company and others are frantically seeking new ways to sneak lobster into unexpected corners of the food market, from gazpacho to puff pastries and quiche.

But before the big names in the industry move lobster from the "catch of the day" to the permanent menu, say industry experts, the kinks in the supply chain must be worked out.

"Being negative is a pretty traditional pursuit for a lobsterman," said Jordan, who admits to occasional griping himself. "But the public conversation about low prices does nothing but depress them further. It's time we all take a more proactive approach."

For now, Daley, of Garbo, says matching supply to demand means processing more lobster in Maine - boiling, picking, freezing and storing lobster - to cover the down times. That, he says, will mean more consistent prices for lobstermen and consumers.

Other efforts, including a $2 million marketing collaborative established by the state legislature this year, should help get the word out, potentially paving the way for new markets, he said.

But scientists caution Mother Nature is likely to have the last word.

In southern New England, lobster populations spiked in the 1990s with warmer water temperatures, then were overwhelmed by disease and have struggled to recover, said researcher Steneck.

As the water warms in the Gulf of Maine, even the most optimistic lobster aficionados admit to a bit of trepidation, an increasing concern as fisheries for species like cod and haddock have either declined or collapsed, leaving fishermen with few alternatives.

"There isn't an investor in all the world who would suggest putting all your money in one stock," said Steneck. "But that's what we're doing here in Maine."