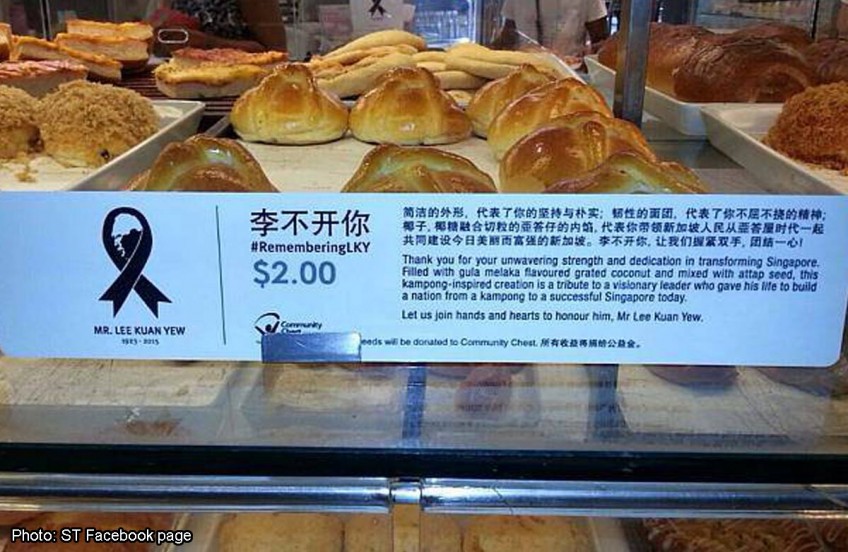 SINGAPORE - On the same day that it launched the sale of buns meant to commemorate Mr Lee Kuan Yew, bakery chain BreadTalk said on Wednesday evening that it has stopped the sale with immediate effect, The Straits Times reported.

The product received massive backlash online after it was launched, with many accusing the bakery chain of being insensitive and disrespectful.

BreadTalk also issued an apology on its Facebook page.

The bakery chain sold the buns, named "Lee Bu Kai Ni", loosely translated as "Can't bear to leave you" in Mandarin, a play on Mr Lee's surname, for $2 each.

The sale was meant to go on until Sunday, with proceeds going towards Community Chest.

In the Facebook post, BreadTalk said it had intended to "create a commemorative product" in memory of Mr Lee Kuan Yew, but "we are made aware that this manner of remembering his legacy was insensitive in light of the current context."

Netizens had slammed the product in online forums and on Facebook, with one user, Nelson Sim, saying it was opportunistic and in bad taste.

Despite the buns being pulled off shelves, BreadTalk said it would still donate $30,000 to the Community Chest, based on the projected sales of the buns.