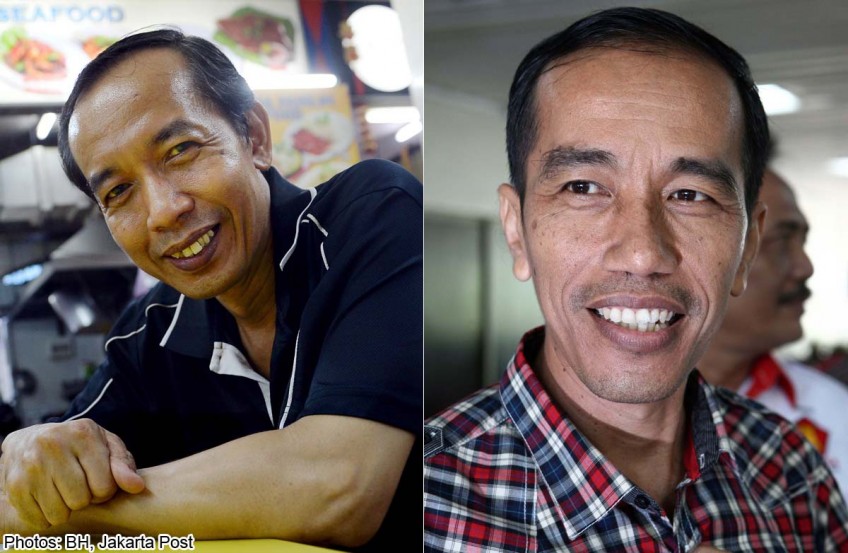 On the right, the real Jokowi, the President of Indonesia. On the left - his doppelganger, Mr Misran Ismail, who works at a food stall in Toa Payoh.

Mr Misran Ismail is no celebrity - he helps out at a food stall.

But over 30 customers have asked to have their picture taken with him.

It's not so much about his cooking - from his looks to his hairstyle and even his smile, he looks almost exactly like the president of Indonesia, Mr Joko Widodo, better known as Jokowi.

"At first, I wondered, 'Why me?' I was surprised when other people told me I looked like Jokowi," he told Berita Harian in an interview published on Saturday (March 21).

According to the father of two, business at Perdana Muslim Seafood, the stall which is run by both him and his wife at Block 95 Toa Payoh, has improved since people have made the link between him and Jokowi.

Mr Misran has been working at the stall, which was rented out by his mother-in-law, for eight years.

His daily routine includes going to the market to buy ingredients, barbecuing stingray and helping his wife.

Before this, he worked as a foreman in a factory.

The Jokowi comparisons started about a year ago, when a hairdresser told him he looked like the Indonesian president.

"(The hairdresser) told me I would command a lot of respect if I went to Jakarta. I was confused until I realised it was because I looked like Jokowi," he said.

At the time, Mr Joko was the governor of Jakarta and the frontrunner in the Indonesian presidential election.

Since then, many have made comments about Mr Misran's looks, including the fish sellers at the market, customers and old friends.

Strangers, too, have come up to him on the street.

"They'll tell me in English: 'Hey! You look like Jokowi!'" he said.

Asked if he's comfortable with his "fame", Mr Misran said he takes it as entertainment.