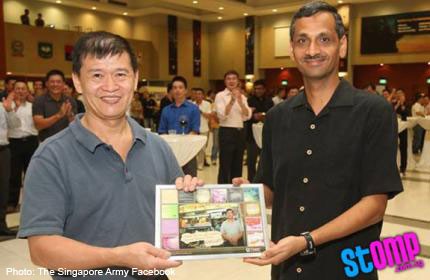 SINGAPORE - The chicken rice seller who treats soldiers to free top-ups of food at Bedok Food Centre has received a Token of Appreciation from the Singapore Armed Forces.

Mr Tan Bee Seng first made it to the news in April when a Stomp contributor sent in a screenshot of a National serviceman who posted on Facebook about the kind-hearted chicken rice seller.

His identity was then revealed by The Singapore Army on its Facebook page in June.

"Earlier in April this year, Mr Tan Bee Seng (also known as the 'Chicken Rice Uncle') was the centre of a heartwarming story where he gave a soldier a free top-up on his meal -- something he has been doing for the past few years to recognise NS in his own way.

"Tonight, Mr Tan received a Token of Appreciation from COA, MG Ravinder Singh for his show of support to our National Servicemen.

"Mr Tan said, 'I feel that it is the least I can do to support our soldiers who work tirelessly to safeguard our nation. I am very honoured that the SAF has given me this token of appreciation. It means a lot to me!'

"Thank you once again Mr Tan for the support shown to our soldiers!"