Preparation for ox dung hotpot begins with a soup or stock made from fluids drained from bovine stomachs.

Police in Italy recently confiscated hundreds of century eggs from a shop in Sicily run by ethnic Chinese, throwing a spotlight on a traditional Chinese delicacy.

Century eggs, prepared by burying eggs in a mixture of clay, ash, salt and lime until they develop a pungent aroma and salty taste, are by no means China's most unusual food.

As a saying goes, there is nothing flying in the air except planes, swimming in the water except ships, and running on the land with four leg except desks that Chinese people dare not eat.

These are 10 of the more unusual dishes from across China. 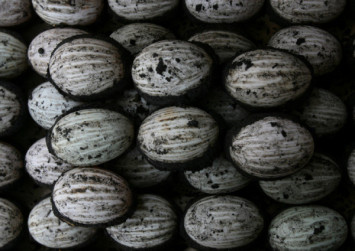 Contrary to its eye-catching name, this dish from the Miao people of southwestern China is made with a fluid that is wrung from semi-digested grass in the animal's stomachs.

The fluid - plus water and spicy ingredients to cover the smell - will be used as a soup for a hotpot that is prepared for distinguished guests. The soup is also sold online for those who might think twice about rummaging around an ox.

It was helpful for the digestion, he said. Still, some would-be diners said they could not bear its aroma, its traditional Chinese medicine-like bitter taste, or in some cases stomach it knowing where the soup came from.

In Nanjing, the capital city of Jiangsu province, live pearl refers to chicken foetus. It was given the name because the foetus looks like a pearl moving inside translucent fluid.

The best time to prepare this dish is at 11-12 days' development and before feathers begin to grow. Fans said it was more nutritious than ordinary eggs and can strengthen the immune system and provide plenty of calcium.

The egg needs to be boiled in water from cold - and on a low heat for about 15 minutes to prevent the shell breaking. After that, it is boiled on high heat then eaten with a dash of spicy salt or sauce.

Other methods involve peeling the shell and frying the egg in Sichuan pepper powders. The dish is loved by aficionados who say they could eat several eggs a time, while others say they could not imagine touching it.

"When opening the shell of a boiled egg, I saw a chicken. I could not believe my eyes," said one diner on news portal Ifeng.com.

This traditional delicacy from Shanghai and Zhejiang involves live river shrimps. The crustaceans are placed in a glass bowl containing wine.

The bowl is covered as the shrimps are soused in alcohol, creating a spectacle for the diner. After the shrimps stop struggling, ingredients such as chilli, garlic and vinegar are added to the bowl.

Drunken shrimps have been called one of 10 most cruel dishes in China, and it is not without risk to the diner as shrimps may contain parasites. The dish has fans across the mainland.

While some people admitted it was a ruthless way to eat shrimps - with diners saying they felt shrimps moving in their mouths but they could not resist it.

Few will work up an appetite for this Guangxi dish, much less dare to look at it, but some people in southern China love roast pig's eyes.

Cumin seeds or spicy sauces are applied to the eyes before eating. Food lovers said they like the dish's mouth feel, describing it as elastic, and how the eyes make a squeaking sound when chewed.

Restaurateurs remind customers not to eat with their mouths open, as fluid is liable to spray over dining companions. as the eyeballs are punctured.

A snack from the Hakka people in the mountainous west of Fujian where the population has made a living from farming for generations. They catch mice found in their agricultural produce and salt the meat.

It's said that mouse meat not only tastes good, but also contains a high level of protein, is good for kidney health and can prevent bed-wetting in children. The meat is cooked like ham and is an agreeable accompaniment to winter wine.

An internet user on Qq.com said that a friend from Fujian once gave him a bag of meat snacks to eat. "It was yummy at the first, but tasted a bit strange after more bites," he wrote. "I was rattled when he told me it was mouse meat - I did not touch it again."

A signature delicacy of Sichuan, pig's brains are usually cooked along with tofu as the two have a similar mouth feel. Preparation can involve boiling, roasting and frying and the brains are often served with noodles.

Its advocates said pig's brains have a fragrant aroma, a tender texture and are not greasy. Following a Chinese folk theory that if you eat part of an animal that part of you will benefit, lovers of this dish say pig's brains will make you smart.

Popular in and around Chengdu in Sichuan province, Datong in Shanxi and Quzhou in Zhejiang, rabbit's head is a spicy snack.

Diners say they prefer tongue and cheek meat before turning to the brain. Cheek meat, they say, has pleasant flavours, while the brains are tender. In Sichuan, rabbit's heads go down well with beer at the street eateries and more than one serving is usually eaten at a sitting

It was reported that as many as 300 million rabbits were eaten in Sichuan each year. Women say they love the dish as it is light and not fattening - not a view shared by some internet users who balk at eating furry friends many regard as pets.

A dish that is prepared by boiling in children's urine, this is regarded as an intangible cultural artefact of Dongyang in eastern Zhejiang province. Residents believe that eating virgin boy egg in springtime can help fight fatigue and heatstroke.

In the past, devotees of this dish were said to collect urine from boys aged four to eight, creating queues outside kindergartens. The eggs are put in a pot of urine and boiled. In the middle of the process, the shells are broken to allow the eggs to absorb the flavour of the urine.

The result, it is said, is a dish that tastes like tea eggs - a common snack in China that involved boiling in tea leaves, salt, star aniseed and sauce. Medical opinion suggests this is a dish best avoided, as urine is bodily waste and contains little in the way of nourishment.

Local to Guangxi, tadpoles are harvested, washed, boiled, the fried in hot oil. Social media opinion is that the dish is disgusting and eating tadpoles is the worst kind of behaviour.

Fried centipedes, dragonflies, spiders and scorpions are not unusual. Residents praise these insects as crunchy meals and a source of high protein, low fat eating.

In January, tourists in Lijiang were offering a tonne of insects from 10 species in a promotion.