Classical Chinese at Beijing No 1 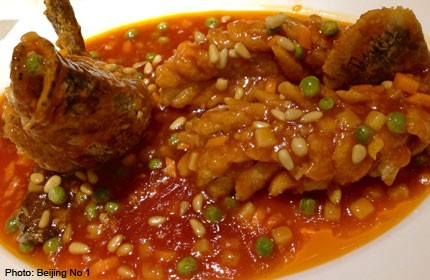 SINGAPORE - In the eyes of a mainland Chinese high roller, this is what a Chinese restaurant should be like: very red, filled with ornate rosewood and other furniture that recalls aristocratic life in the good old dynasty days, serving elaborate banquet-style cuisine at prices that over-zealous medical specialists would approve of.

Beijing No 1 certainly aims to please with its Dream of the Red Chamber orientalism that makes you feel like you've crawled into a giant hongbao - although it looks perfectly at home against a gleaming backdrop of slot machines and baccarat tables.

Located in Marina Bay Sands' (MBS) celebrity chef row which features Waku Ghin and Guy Savoy, Beijing No 1 ends all speculation about which Michelin-starred chef would take over the premises vacated by Santi - which closed not long after the unexpected death of three-starred Spanish chef Santi Santamaria in 2011.

Instead of running the restaurant itself, MBS has leased out the space to the owners of Beijing No 1, whose only Michelin connection is executive chef Shi Wei Dong, who helmed Wynn Macau's two-starred Golden Flower restaurant. He moved to Singapore at the behest of his shifu (master) Liu Guo Zhu - the executive chef in charge of Wynn Macau's entire Chinese kitchen operations, including Golden Flower, and was also the master chef at the historic Beijing hotel before that.

Hence the restaurant's concept as designed by master chef Liu - a tribute to old Beijing, specifically the little-known Tan cuisine, said to be traceable to a chap named Tan Zongjun, a Qing dynasty official who loved his food and enjoyed tinkering in the kitchen with the Beijing chefs he hired. By the end of the Qing dynasty, the home-style recipes he created had evolved into a full-fledged cuisine that was named after him.

Since we wouldn't know Tan cuisine from Lim, Lee or Wong, we can only guess that Beijing No 1 is a hybrid of Chinese cooking styles, although its emphasis on steaming and braising leans a little more towards Teochew, while its predilection for soaking food in oil is a definite Beijing quirk. Despite clearly gunning for the Paiza Club set rather than the aunties playing the five cents-a-pull jackpot machines, service at Beijing No 1 is surprisingly down-to-earth. The staff are genuinely friendly and helpful and aren't at all perturbed that you're scanning the menu for the cheapest dishes that offer a bit more nourishment than poached spinach marinated with sesame sauce ($17).

What sets our radar off is the expert execution of the "cheap" dishes, displaying a finesse that's a notch above other upscale Chinese restaurants in town. It's not a pure apple-to-apple comparison, though. This is Chinese cuisine from a Beijing, not Hong Kong perspective, but tweaked to appeal to a more cosmopolitan palate that might find the strong, rough-edged "authenticity" of Beijing cuisine too much of a culture shock.

As it turns out, we happily relish the tossed jellyfish in Chinese aged vinegar and garlic ($30) - a tangy take on the ubiquitous cold starter. The jellyfish - with more bite and flavour than the common variety - is cut into short jagged shreds and tossed in garlic oil and a touch of mellow vinegar that pulls it together. Pork hock terrine ($26) is a pretty still life of tender braised pork pressed into clear jellied consommé and cut into elegant rectangles that outshine that of any Teochew restaurant here.

In turn, the pan-fried dumplings or guo tie ($24) are juicy, perfect morsels comprising not-too-thick-or-thin chewy pastry filled with a lightly seasoned, toothsome minced meat mixture and an almost gossamer-thin crisp "ceiling" that fuses all eight dumplings. A slight letdown is the crispy duck ($52) - well seasoned and tasting almost like Chinese duck confit with a pleasant five-spice aroma, the dark meat is tender and tasty, but the stringy breast meat cancels it out.

Despite watching the bill, we succumb to indulgence with an order of braised sea cucumber with Shandong leeks ($90) - a decadent whole, spiny specimen braised till just the right texture of unctuous yet tooth-yielding, glazed with a mild brown sauce. The smallest fish they have is a polka dot garoupa ($42/100g normally but "today special offer $36") that ends up costing $180. But it's beautifully deep fried in a sweet sour sauce - the ultimate test of a Chinese restaurant which it passes with flying colours thanks to its perfect balance of flavour and sauce consistency.

It's still a bargain compared to its signature fish - poached live star garoupa in chilli oil ($309) - or braised Jin Shan shark's fin in supreme chicken broth ($398) and even the Emperor fish at $1,980 for a whole specimen.

For all its aristocratic aspirations, Beijing No 1's cooking is pleasantly unpretentious. It's probably not over-priced when seen in the context of its neighbours, so if you can get past the psychological barrier that says Chinese food should not cost as much as a Japanese or French restaurant, all the better.

We, on the other hand, like the food but not at that price, so the next time we go will be when we hit a jackpot of some kind.